Having negotiated the Champions League first qualifying round with relative comfort after a 3-0 aggregate win over Hibernians of Malta , the next step for Shamrock Rovers is a tough task against Bulgarian champions Ludogorets.

Tonight, live on RTÉ2 and the RTÉ Player, the Hoops are away in the city of Razgrad, where they will hope to keep themselves in the tie ahead of next week's second leg at Tallaght Stadium.

But Stephen Bradley and his side won't be thinking that far ahead yet given Ludogorets' Champions League pedigree and quality as ex-St Patrick's Athletic and Shelbourne midfielder Conan Byrne outlined on the RTÉ Soccer Podcast.

"They've started back their league campaign recently over the last couple of weeks and got off to a 3-0 away win and a 2-0 home win," he said of the Bulgarian side who have won the last 11 league titles on the trot as well as often reaching the group stages of the Champions League or Europa League during that span.

"They score a lot of goals and they don't concede many so that's going to be an interesting scenario now for Shamrock Rovers coming into the game.

"They'll have to be on the lookout for the Cypriot international Pieros Sotiriou, a wonderful goalscorer with 17 goals in 20 starts last season.

"He'll be their main man up top that they'll have to look at very, very closely."

Byrne also pointed to "dangermen" like Argentinian forward Matías Tissera and Brazilian midfielder Alex Santana who is "an excellent goal-scoring midfielder" in a squad replete with full internationals.

In terms of the positives to build on for Shamrock Rovers, he highlighted Rory Gaffney's willingness to stretch defences and Dylan Watts' style of play which suits European games.

And he feels Roberto Lopes will be "key" in marshalling the back three, with protection in front of them likely to be provided by Gary O'Neil and Chris McCann in a necessarily "compact" structure away from home and in intense heat. 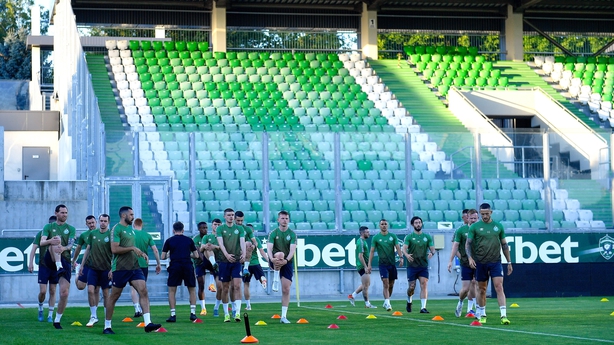 "I wouldn't rule Shamrock Rovers out of this game," he said.

"They'll obviously have to keep an eye on the danger players but I think in wide areas, that's the way Shamrock Rovers play, they can be very, very effective.

"And obviously with Jack Byrne back, I think that's a huge plus."

Jack Byrne returned from injury and featured as a substitute in the second leg against Hibernians last week and ex-Ireland midfielder Keith Treacy feels the qualities the four-time Irish senior cap can bring into the midfield will help the Hoops' cause.

"He just plays in them holes all the time and every player knows when you're going to try and press the ball and you know there's somebody behind you constantly making angles off you, it just makes your job so much harder because you don't know where you can apply the pressure," he said.

"But I would echo what Conan says. Ludogorets are favourites, I don't think you can get away from that, especially over two legs, but I wouldn't be totally dead set against Rovers not getting anything. I think they have a chance."