Peter Collins presents all the action from the opening leg of the second qualifying round tie in Bulgaria on RTÉ2 from 6.30pm, with streaming live online on RTÉ Player.

We'll have a live blog on rte.ie/sport, the RTÉ News app, as well as updates and goals on RTÉ Soccer Twitter and RTÉ Sport Facebook.

A warm and sunny day is in store in Razgrad, with peak temperatures hitting 30C in the afternoon, although things should have cooled down come kick-off time, with temperatures likely to be in the low 20s.

A STEP UP FOR ROVERS

Shamrock Rovers go into their Champions League second qualifying round tie knowing that they face a much sterner task than they did in the opening round.

Having seen off the challenge of Maltese champions Hibernians with a 3-0 win at Tallaght and a professional scoreless draw in the away leg, it's a trip to Bulgaria to take on Ludogorets.

The Bulgarian champions are on a streak of 10 consecutive league titles, during which time they’ve played in the group stages of both the Champions League and Europa League on more than one occasion, heavily backed by billionaire Kiril Domuschiev.

Ante Simundza’s side have nine regular international players among their ranks, and can call upon a wealth of talent, and eased to a 3-0 victory over Montenegrin side Sutjeska in their opening qualifying round.

Rovers won’t have the advantage of catching Ludogorets in the midst of pre-season preparations, with the Bulgarian league already under way and the defending champions already sitting atop the table with two wins from two.

The Hoops, meanwhile, should have a near full-strength team to chose from. Jack Byrne featured against Hibernians as his return from injury continues apace, while Graham Burke is also in the reckoning.

Neil Farrugia has travelled with the squad but this game looks to have come too early for him.

The Irish champions haven’t had the most straightforward build-up to tonight’s game, with travel headaches abounding for the Hoops.

A lack of available direct flights and no charters meant that Stephen Bradley’s side have had a tricky time in getting to Razgrad.

The short time between their victory over Hibernians and the confirmation that they’d be facing Ludogarets means that Rovers have had to get inventive and split the travelling party up.

Some players were booked on a commercial flight to Sofia before making the 335km journey to Razgrad, while others first flew to Gatwick and Luton before subsequent flights took them to Burgas, where they needed to still travel an hour and a half by road before making it to the team hotel.

Far from ideal preparation for such a crucial Champions League encounter, but manager Stephen Bradley isn’t overly concerned now that everyone has arrived in Bulgaria safe and sound.

"It was okay," he said. "We had to split the group – some went direct, and some went different routes but overall, it’s fine.

"This is where we wanted to be, this is what we worked for so if you have to do a day’s travelling, you take that no problem."

KEEPING IT TIGHT AT THE BACK

Rovers go into the game and the tie as the underdogs, but playing away from home in the first leg should suit them.

Nevertheless, Bradley knows that if his side are to have any hopes of progressing to the next round, they have to make sure that the tie is still alive by the time they take Ludogorets back to Tallaght.

Domestically, Rovers are used to being the team that everyone else sits back against, but in Bulgaria it will be Bradley’s side looking to stifle and frustrate their opponents.

The Rovers boss wants to see a complete performance defensively from his team and emphasised that everyone, not just the defenders, will have to work hard to frustrate their opponents in front of goal.

"I don’t think that’s just the back five, it’s the team," he said. "It’s everyone, from the centre-forwards to start our press and defensive shape.

"As a team, we know we’ll have to be switched on and be ready to defend and go through a few spells without the ball. But we’ve been there before so it won’t be an issue. It’ll be nothing new for us."

Meanwhile, the Ludogorets manager is wary that Rovers may be in better condition that his side, given the advanced stage of the League of Ireland Premier Division.

Simundza acknowledges this side are the favourites, but admitted that Rovers’ "aggressive" style of play is cause for concern, particularly at home.

"It will not be an easy game," he said. "They are in the middle of their season and we are starting.

"They play in a different system, they are very, very aggressive at home and play with a lot of players in front, with three behind, and they rotate a lot of times in the attacking part of the pitch.

DEFEAT WON’T BE THE END

Should Rovers be unable to get the better of Ludogorets over two legs, it won’t mean the end of their European adventures.

This winner of this tie will face the winners of Dinamo Zagreb (Croatia) or Shkupi (North Macedonia) in the third qualifying round of the Champions League.

Whoever loses between Rovers and Ludogorets will face the losing team in that other tie – most likely Shkupi – in the Europa League third round qualifiers.

Either way, Rovers are moving closer and closer to the holy grail for League of Ireland teams – group stage action in a UEFA competition. 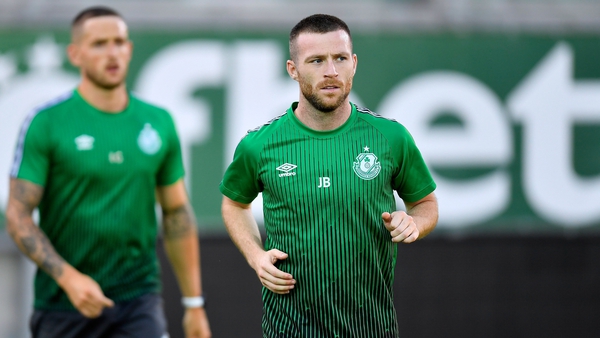 Shamrock Rovers 'have a chance' despite Ludogorets' pedigree