When the next World Cup kicks off on 20 July 2023, Ireland will be hoping to be there for the very first time.

Qualification results so far have given Vera Pauw's side a real chance of making it to the play-offs, especially after the 9-0 win in Georgia on Monday.

But before the campaign resumes with the crucial two last games against Finland and Slovakia in September, there will be a watching brief in July as Women's Euro 2022 takes centre stage.

All 31 matches of the tournament will be live on RTÉ television and the RTÉ Player from Wednesday, 6 July and Ireland defender Louise Quinn will be among the cast of pundits.

One would imagine that for Quinn and co, the analysis of the 16 teams will be most intense when it comes to Finland who are in what is deemed to be the Group of Death alongside Germany, Spain and Denmark and are a team which Ireland earned a famous 2-1 win against in Helsinki last October.

"It's such an exciting group of teams to be able to watch but we'll definitely be doing our bit of homework," Quinn told the RTÉ Soccer Podcast in the wake of the launch of RTÉ's tournament coverage.

"We all love playing the game but we also all love watching it and then there's especially some of us who love the coaching and analysing part of it as well so you're going to look that little bit deeper into how they're playing.

"But I'm definitely going to be doing my homework on the Finns and obviously potentially we can do a job there."

Based on the FIFA rankings, Ireland are the 16th best team from the currently active UEFA nations which is the exact number of teams which qualify for the European Championships.

Draws against Sweden in April and the aforementioned win in Finland during the World Cup campaign are somewhat bittersweet in one sense: Ireland have shown they have the quality to mix it with the types of teams that will light up Euro 2022.

Of course, Pauw's side narrowly missed out on the play-offs for the tournament and having to watch this summer's edition from afar is fueling Quinn and her team-mates' desire to join the party when the next major tournament comes along.

"It has hopefully made us better for it. I think it has," said the 32-year-old.

"Mentally we were able to handle these situations and play these teams maybe with less pressure.

"It's that feeling after the Ukraine game and not qualifying, for me - I don't mean it in the dramatic way - it kind of doesn't get worse.

"It can maybe but that was a low time for the squad. We had the talent there but we just needed that extra something to take it over the line and we missed out on that.

"But then from that experience, everyone now keeps that at the back of their mind and just not wanting to go through that again."

Louise Quinn on the end of another quality Megan Connolly delivery to make it 5-0 early in second half #rtesoccer
Updates - https://t.co/HgrLURWhjJ
Watch - https://t.co/CfnEhdAQdE
Radio - https://t.co/JDLto3wUVJ pic.twitter.com/mqA3qy1Y9P

A sign of Ireland's progression is how they have seamlessly handled the challenge of the variety of teams they have faced. From grinding out results against the Swedes and the Finns, they have also needed to show their attacking ruthlessness as they did in plundering 20 goals home and away versus Georgia, Quinn scoring a brace from set-pieces in Monday's game in Gori.

That increasing adaptability is a point of pride for the Irish squad.

"Maybe it's something we've struggled with a little bit in the past," Quinn said.

"We have always tried to be defensively sound, trying our best not to concede so many goals and are very good at frustrating teams.

"But then we needed that attacking ability to be able to go forward and I think we're really showing that in this group with the results against Georgia.

'There's working Louise Quinn out and then there is trying to deal with her. Two entirely different things'
Georgia 0-6 Republic of Ireland
Updates - https://t.co/HgrLURWhjJ
Watch - https://t.co/CfnEhdAQdE
Radio - https://t.co/JDLto3wUVJ pic.twitter.com/OIvd4xaRTk

"For the development of the (global) game as well, it has been spoken about, you don't really want results like that in group stages in these tournaments but for us personally we've got our own barriers and steps we need to overcome and that's at times being consistent with scoring goals.

"But I think this campaign we've shown it and shown it against many teams and even against some of the top teams as well.

"We're not holding out for a 0-0 just to get through it. We want to go and attack and be on the front foot."

Part 2 of the interview will be published on the RTÉ Soccer Podcast on Monday, 4 July in which Quinn assesses the teams and players to watch at Women's Euro 2022. 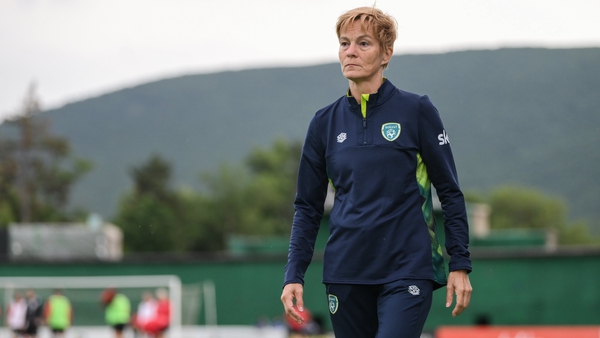