Team captain Katie McCabe and manager Vera Pauw have urged people of all ages to come out in numbers to support their team as the Republic of Ireland continue their quest towards the World Cup play-offs.

Monday's 9-0 humbling of Georgia meant the Girls in Green leapfrog Finland into second place, a point ahead with a vastly superior goal difference ahead of Finland’s visit to Dublin on 1 September.

A win would guarantee Pauw’s team a play-off spot for World Cup 2023 and keep alive their bid to qualify for a first-ever major championships.

After recording an 11-0 win at home over Georgia in November, the result was never in doubt, more the size of victory. As it turned out, the visitors made hay on their goal difference which could be key come the end of the campaign.

Leading 4-0 at the interval, Ireland upped the gears in the second half with Katie McCabe (hat-trick), Louise Quinn (two goals), player of the match Megan Connolly and the ever-consistent Denise O’Sullivan among those to shine brightest in a record-equalling away victory.

Speaking to RTÉ Sport, McCabe again resisted calls for the game to moved to the Aviva Stadium, urging people to come out and support the team in their quest for a slice of history.

"We want to see as many fans as we can and pack out Tallaght Stadium," she said.

"We want to make sure we are packing it out and getting everyone behind us because it is a massive game.

"That’s our home pitch. We want to sell it out, create a really good atmosphere for everybody. We are well used to it."

Pauw made a similar rallying call, hoping the public will show their appreciation for a team moving in the right direction.

We have the feeling that we can maybe do it, with the support in our home stadium

"I hope Tallaght Stadium will be packed with a lot of noise. We really, really need that.

"We have two games to go and we have it in our own hands. We have the feeling that we can maybe do it, with the support in our home stadium." 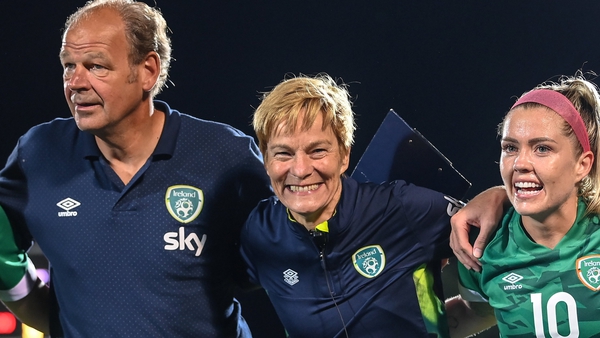