But Bohemians manager Keith Long thought things might have turned differently in Tallaght had the hosts' Sean Kavanagh been shown an eighth-minute red card for what looked a professional foul on Promise Omochere.

"I'd like to see it back, I haven’t seen it back clearly, but Promise looks like he was clear and was taken down by Kavanagh," Long told RTÉ Sport.

"I know it’s a long way from goal so there might be mitigating factors that I’m not aware of from the officials but it looked like Promise was clear in on goal.

"A lot of pitch to travel but it looked like it was a sending-off offence in my view. "Who knows what may have happened then after…"

17mins SHA 0-0 BOH
No score yet in the Dublin derby. Sean Kavanagh got yellow for this challenge. Should it have been red? #rtesoccer
💻 https://t.co/fqOfkck6RT
📺 https://t.co/KbteCloVqf… pic.twitter.com/mXRd3Tr8zF

The sides went in level at the break but some poor marking at a corner allowed Gaffney to hook home the decisive strike in the first minute of the second half.

"At half-time we were well in the game, well in the game throughout," said Long. "I thought we looked lively, we competed for every ball and we were first to most. Challenges were coming thick and fast, we were on the front foot, we wanted to attack the game.

"We created some chances and certainly on the break we looked very lively, our front four were really good going forward.

"But we came out slow second half. Tadhg Ryan makes a really good save and from the resulting corner we concede.

"We miss the first challenge and the second challenge. In a Dublin derby, many of the games are defined by set plays and unfortunately we got done.

"We have to take responsibility. The players know their jobs and we need to see out those moments. When we get a chance at the opposite end we don’t quite get on the end of things so we that’s where we need to smarten up a bit.

"Rovers came into a little bit more second half and caused us problems but I thought for long periods that we were the better team."

Shamrock Rovers manager Stephen Bradley was delighted to see his side come out on top and go seven points clear of Dundalk in the title race.

"It's fantastic to win a Dublin derby. We knew it would be a tough game, a tight game, they always are," he said. "But the main objective was to get three points and thankfully we’ve done that."

"First half we were just okay but we had good chances, probably the best chances in the game and at half-time we had a chat. We needed to go a bit and in the second half I thought we did and the timing of the goal was very important."

"That's why we do our work in the first part of the season, so hopefully in the second part you have really, really big games..." - Rovers manager Stephen Bradley speaking to RTE Sport after the win over Bohs. #rtesoccer pic.twitter.com/DMygkSrCjK

There is no little time for Rovers to rest on their laurels as they face St Patrick’s Athletic in another Dublin derby on Monday. After that, there is a trip to Finn Harps next Friday before the first leg of their Champions League qualifier against Malta’s Hibernians on 5 July.

But Bradley said his squad are not daunted by the prospect of big games in quick succession.

"That’s why we do our work in the first half of the season so hopefully then the second part, you have really, really big games and we’ve got that and these players show up," he said.

"They’ve shown that over the last three years. They show up on big occasions and they did again tonight."

The manager also thanked Rovers fans at Tallaght for their show of support in the eighth minute, with Bradley having missed last week’s defeat at Dundalk due to family reasons.

"I just want to say a massive thank you to everyone who was involved in that," he said.

"My little son Josh is watching that in Crumlin Hospital and that would have made him proud." 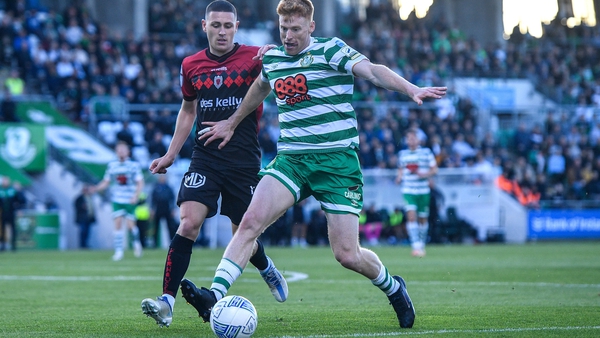