They weren't at their best, but Shamrock Rovers collected a crucial three points to get back to winning ways against their biggest rivals at Tallaght Stadium on Friday.

Rory Gaffney’s second-half strike was the only goal of the game, as the Hoops redeemed themselves following last week’s late defeat to surprise title-challengers, Dundalk.

The win puts the champions seven points clear of their Louth rivals, who were held to a scoreless draw by Shelbourne this evening.

Bohs, meanwhile, remain stuck in sixth-placed, struggling to find consistency and again falling to defeat off the back of a victory.

Both sides were without key players on the night. The hosts were deprived of the injured Jack Byrne and their suspended captain, Ronan Finn, while an injury sustained on international duty continues to keep Bohemians goalkeeper James Talbot on the sidelines.

Most clubs have seen attendances swell since the full return of fans after Covid restrictions, but even by those standards, the interest generated by these two sides remains an outlier.

Even with the game live on RTÉ 2, all 7,400 tickets available sold out four days prior to kick-off.

And, as the sight of diggers behind the north end reminded us, this fixture may soon boast an attendance of over 10,000, when the construction of a fourth stand is completed in late 2023.

Lining up in their customary 3-5-2, Rovers started the game with three former Gypsies – Andy Lyons, Roberto Lopes and Danny Mandroiu – running through the spine of their team.

17mins SHA 0-0 BOH
No score yet in the Dublin derby. Sean Kavanagh got yellow for this challenge. Should it have been red? #rtesoccer
💻 https://t.co/fqOfkck6RT
📺 https://t.co/KbteCloVqf… pic.twitter.com/mXRd3Tr8zF

Mandroiu had an early free-kick parried away by Tadhg Ryan, but it was Lyons – the most recent defection from Northside to Southside – who attracted the majority of the away fans’ ire as he charged dangerously up the right wing throughout the 90 minutes.

The Hoops are used to threading the ball at their own pace in Tallaght, but the visitors minimised the space well tonight, setting up in a disciplined 4-4-2.

Bohs duo Promise Omochere and Junior Ogedi-Uzokwe worked tirelessly to unsettle their opponents, however, it was the Hoops who mustered up most of the game’s best chances on a night where clear cut opportunities were few and far between.

Mandroiu came close when he fizzed a long-range shot just over on the stroke of half-time, but Ryan was hardly troubled for most of the first half.

In stark contrast, the second-half was hardly a minute old when man-of-the-match Gaffney took charge of proceedings.

Played in by Lyons, the 32-year-old had a shot from four yards thwarted away by Ryan, before he showed his goal-scoring instinct to tap home the resulting corner, after Mandroiu’s flick-on to the back post.

Once in the lead, Rovers did well to neutralise proceedings.

Stephen Bradley introduced the experienced Chris McCann to cushion any tensions in midfield, while the back three was bolstered by the retreating wingbacks, Lyons and Kavanagh.

Bohs struggled to break down that bank, but came close with 10 minutes to go, when Omochere nodded Jordan Flores’ corner mere inches wide of the back post. 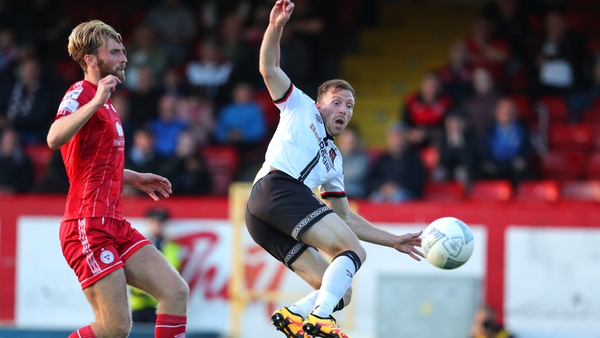