By Johnny Ward at Tolka Park

Wasteful Dundalk surrendered ground in the title race in a forgettable game on a balmy evening in Drumcondra.

Robbie Benson, David McMillan – in for the absent Patrick Hoban – and substitute John Martin all had really good chances for the Lilywhites, Shels struggling to fashion anything at the other end.

It was a cagey, error-ridden and a frustrating night for Dundalk – but this is a competitive league and few wins are easily earned.

Sloppy Greg Sloggett play resulted in a Shels free-kick in a promising position on eight minutes but Shane Farrell got under the ball from his delivery. The Reds were certainly not lacking confidence, evinced by the beautiful touch of the promising Jad Hakiki: Dundalk were in a battle by the Tolka.

The pitch was bumpy in places but both sides were intent on passing the ball. Steven Bradley's deflected drive had Brendan Clarke scampering as Dundalk edged into the game but their own passing was decidedly hit and miss.

Bradley got into a dangerous position midway through the half, only to make a hames of his cross.
This game was struggling to take on life and one would forgive some of the home fans if their thoughts were already turning to the Mauro Picotto gig in the bar afterwards. 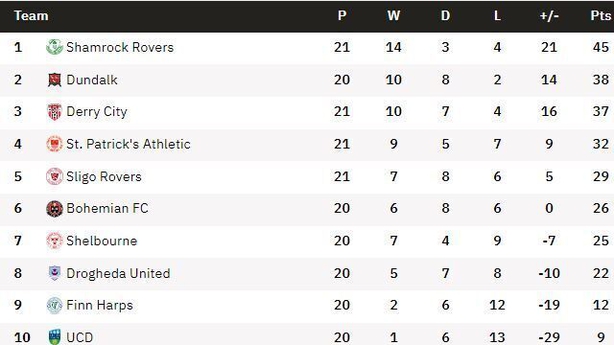 However, Dundalk should have gone ahead on 33 minutes. Benson stole in from a deflected pass and, with just Clarke to beat, he was off target. You'd have expected him to score.

Superb Bradley play had Conor Kane in a knot before the break; true to the first half, it came to nothing.

Dundalk began the second half well and should have scored on six minutes. JJ Lunney uncharacteristically gave the ball away and from Lewis' Macari's excellent cross, McMillan – who has started rarely this term – got his connection all wrong from about eight yards out.

Nathan Sheppard has impressed Oriel observers and he was really smartly off his line to thwart Jack Moylan from a beautiful Lunney curler.

Typical of the game, a lovely Lunney pass put Moylan in down the wing but his cross was a shocker.

Sheppard scampered to bat away a Boyd header, the game opening up a little. A cracking Darragh Leahy delivery invited a Robbie Benson header but it was well over.

The game briefly came alive with ten minutes to go. Sean Boyd's cushioned header had Welshman Sheppard alive to the threat of Aodh Dervin, before another substitute, Martin, hooked over from a fine right-footed Bradley centre.

Mark Connolly was again outstanding as Shelbourne finished well, without creating a chance of note in the entire 90 minutes. Ryan O'Kane showed real promise when coming off the bench for the Lilywhites, flashing a shot wide at the death.

As an Italian, perhaps Picotto appreciated the scoreless bore. Perhaps.