After four games in ten days everyone should have had their fill of international football, however, when Nathan Collins scores a goal like that, it just leaves you wanting more.

A goal that will be watched over and over, and will certainly be remembered as one of the great Ireland international goals, such was the quality of the opener in Lodz on Tuesday night as Ireland played out an entertaining 1-1 draw with Ukraine.

Emerging as one of Ireland's brightest prospects over the last few years, coming through the ranks at Stoke City and impressing at underage level for his country, Collins made the move to the Premier League, bided his time waiting patiently for his opportunity at Burnley, then took his chance to show that he was already comfortable at that level.

And it showed throughout the international window as he slotted into that back three, playing with confidence and composure, reading the game well and always looking for an angle to attack.

In the 31st minute of the Nations League encounter in Lodz, that opportunity presented itself, and once Collins set off to intercept, there was a feeling inside the stadium that something special was about to happen.

Ukraine 0-1 Ireland - Nathan Collins puts the visitors in front with a sensational individual goal having delivered a 'masterclass' of defending in the first half hour #rtesoccer #UKRvIRL
💻 https://t.co/w5JRG3O0hS
📺 https://t.co/2W5kFtUgZE
📻 https://t.co/QHSJNYlfx8 pic.twitter.com/y0ulAtOn6J

A remarkable run, taking the ball at pace and carrying it beyond three Ukraine players before having the clarity of mind and natural talent to flick the ball beyond the keeper with the outside of the right foot into the back of the net.

"Nathan has established himself, he's caught the imagination," said manager Stephen Kenny after the game.

"One thing we know is that he loves dribbling, dribbling at pace. But in the central position, it is not as easy, but he dispelled that myth completely by running straight through the middle of the park and going all the way, it was certainly a sublime finish and it was a moment of brilliance really."

It was a brilliant goal, however, Collins’ overall performance and his showing throughout this end of season series is far more important when the bigger picture is looked at.

First Dara O’Shea, then Andrew Omobamidele and now Nathan Collins, a trio of top class central defenders already established at international level and still only in the embryonic stages of their footballing careers.

A foundation to build a future upon, and that is what Stephen Kenny is doing, and while that was not completely evident from the opening two games of this international window, especially losing to a weaker team in Armenia, overall, Ireland have come through it with a lot more positives than negatives.

An emphatic win against Scotland put the team back on track, having come into the summer series off the back of an eight-game unbeaten run, and on reflection, the manager is justified when he talks about the misfortune of losing at home to Ukraine, falling to a fluke goal that bounced straight in from a sideline free-kick.

The team then backed it up in Lodz against a stronger Ukraine side, and the overall performance against a technically more gifted side should really stand to them going into the September games and beyond to next year’s European championships qualifiers.

Ukraine dominated the first half of the game with some really eye-catching moves and had two excellent goalscoring opportunities.

But Ireland’s strength in depth proved crucial in this game, and what was effectively Kenny’s second string, weathered the storm, as Caoimhin Kelleher made two vital saves, while the trio in front stood firm throughout.

An "emerging team", is how the manager described his side, "a work in progress, capable of getting better and better", he added, following that emphatic win over Scotland.

The pressure was back on the manager ahead of that game and he would have been forgiven for enjoying the personal moment of vindication, however, such is the dedication and devotion that he is bringing to the role, his mind was already on the away game in Ukraine.

Losing Michael Obafemi ahead of the match really hampered the team’s chances in Lodz, after such an impressive overall performance in Dublin, and his pace and power would really have suited the Irish tactical approach to the game, looking to exploit the space behind both full-backs.

On another night, in a different era, Ireland would have shut up shop midway through that second half, parked the bus and looked to hold on against the ball-playing opponents.

But this new-look Ireland squad now have the competition for places to enable the second-half substitutions to come on and make the team stronger in attack for the closing stages rather than adding bodies behind the ball.

Full-time: Ukraine 1-1 Ireland
An entertaining game in Lodz finishes with Ireland on the attack searching for a winner - an impressive follow-up to win over Scotland #rtesoccer #UKRvIRL
💻 https://t.co/w5JRG3O0hS
📺 https://t.co/2W5kFtUgZE
📻 https://t.co/QHSJNYlfx8 pic.twitter.com/4sCTckRns8

Callum Robinson hasn’t had the best international window, however, his contribution was excellent off the bench, while Conor Hourihane and Jeff Hendrick brought experience, with both players keeping the team on the front foot throughout the final 20 minutes.

And then Chiedozie Ogbene, clearly not operating at 100 per cent fitness, offering a real threat in the final third, and if any team were going to win it in injury time, it was the men in orange.

Turkish referee Ali Palabıyık allowed the game to flow throughout at the compact Polish venue to bring the Nations League window to a close, however, if he’d played the correct amount of injury time, and not the paltry two minutes that were added, perhaps Ireland may have snatched one at the death.

A victory would have left Ireland top of the group heading into the final two games, however, now when the standings are appraised and final fixtures are taken into consideration, it really is Ukraine’s to lose.

All the talk going into this Nations League campaign was about winning the group, but the reality is that the purpose of the competition is to prepare properly for the Euro 2024 qualifiers, and this four-game window has certainly served its purpose. 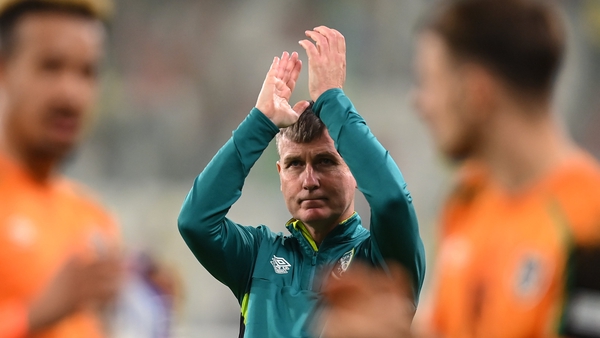 Kenny disappointed to leave Lodz without a victory