Given that Dara O'Shea and Darragh Lenihan were partnering Nathan Collins in the Republic of Ireland defence, both had a bird's eye view of his mazy dribble and goal against Ukraine in Lodz on Tuesday night.

The Burnley centre-back's solo goal gave the Boys in Green the lead in the final UEFA Nations League fixture of the June window with the main frustration being the concession of an equaliser just after half-time in the 1-1 draw.

But it's Collins' first Irish senior goal that lives long in the memory, including for his defensive colleagues.

"It was world class but I'm not surprised," O'Shea told RTÉ Sport of the Burnley man's goal.

"He's been unbelievable this past while and I think he's just got to keep that momentum going now, keep riding the wave.

"But credit to him for that goal, it was unbelievable."

Lenihan echoed that sentiment, adding: "It was special, running from I don't know where from, but taking on a couple of players and just having the composure to finish.

"It was as a great goal and gave us a great start to the game. (Ukraine) are a good team. We'll look at where we can improve and hopefully get better for September."

Lenihan, who impressed as Blackburn Rovers captain in the Championship last season, was winning his third Ireland senior cap and first since 2018, in the absence of regular starters Shane Duffy, Seamus Coleman and John Egan.

Having acquitted himself well in a new-look partnership alongside O'Shea and Collins, the 28-year-old credited the squad depth in Stephen Kenny's playing pool.

"We've such strength in depth in the squad, especially in the position I'm in," he said.

Darragh Lenihan impressed on his first competitive start for his nation, but the humble Meathman took the opportunity in his post-match interview to heap praise on his Ireland team-mates. #rtesoccer #UKRvIRL #NationsLeague pic.twitter.com/7z6MxDd1vD

"To have the likes of Seamus, Shay and John missing and Andrew [Omobamidele] who's injured as well.

"But that's what it's a part of. The togetherness in this bunch is something else. We were frustrated with the (Ukraine) goal but we have to move on from it."

West Brom's O'Shea agreed that the squad was "disappointed" not to win the game based on the overall performance but that on an individual level it was somewhat of an "emotional" boost to be back at the heart of a competitive Irish defence given the lay-off he endured midway through last season.

On the depth at centre-back, he added: "It's pushing us all on and we all have to step up a gear or two. No one's safe, you can't rest on your last game.

"You've got to keep pushing and I think that's positive. I can't remember the last time an Irish team had competition like that at the back so it's something that I'm relishing." 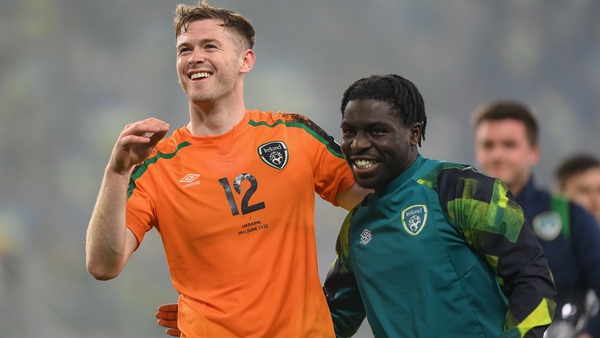