The Republic of Ireland earned a point against Ukraine away from home in Lodz, Poland, Here is how we rated Stephen Kenny's side tonight. 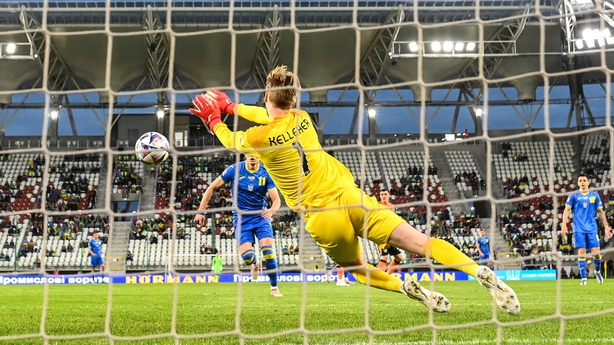 Parried well from Ruslan Malinovskyi in the first half, always looked assured with the ball at his feet. Saved again well from Vitaliy Mykolenko after he got in behind Alan Browne. Dealt with crosses and setpieces comfortably, a presence behind his back three. Always made the right decision on when to play out through the back and when to play long. A top goalkeeper but will do well to hold on to the number one spot when Gavin Bazunu comes back. 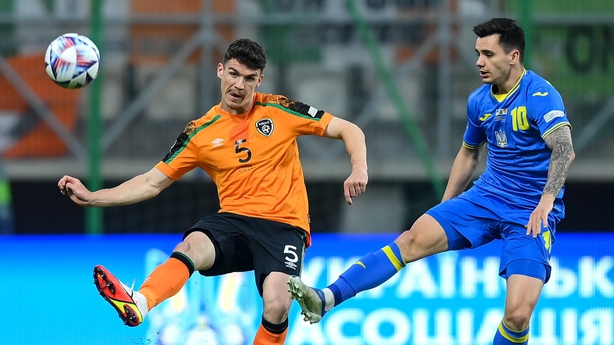 You would never have thought that this was his first competitive start, the Meathman looked an assured presence on the right of the back three. The Blackburn Rovers skipper was a presence in both boxes and fired a volley wide after reacting quickest to a loose ball. Went into the book for a bad challenge on Mykhailo Mudryk. He would have impressed his new club manager Jon Dahl Tomasson, but could be on his way out of the club. 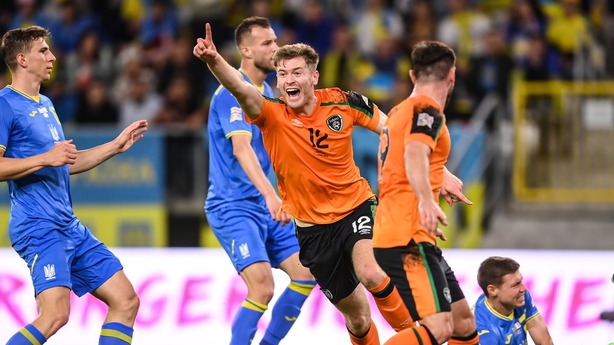 Scored one of the best goals ever seen in an Ireland shirt. Read the game superbly, stepped into midfield and beyond, dribbled past a couple Ukrainian defenders and then produced the most exquisite outside of the foot finishes you'll ever see. Faultless in possession, with a good turn of pace when needed. He will have put Shane Duffy's spot under pressure in the middle of defence. Defended well at the heart of the back three, a marvel and future Ireland captain. 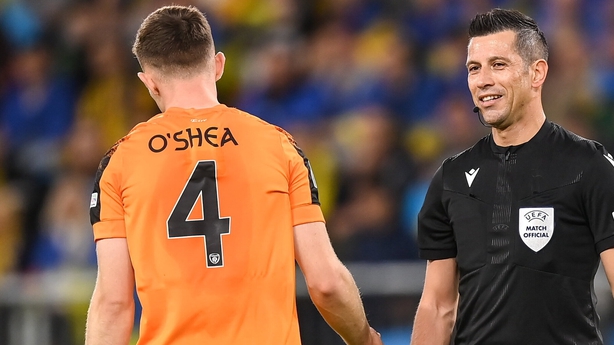 Played on the more unnatural left of the back three for a right-footed centre-back. Powerful in the air, and quick on the turn, he just could not get back quick enough to stop Andriy Yarmolenko's cross that set up the equaliser. Thought he might have given away a penalty when he dangled a leg in front of Yarmolenko but did well to get out of the way just in time. Has bounced back well in an Ireland shirt after suffering a horrendous injury in Portugal last year. 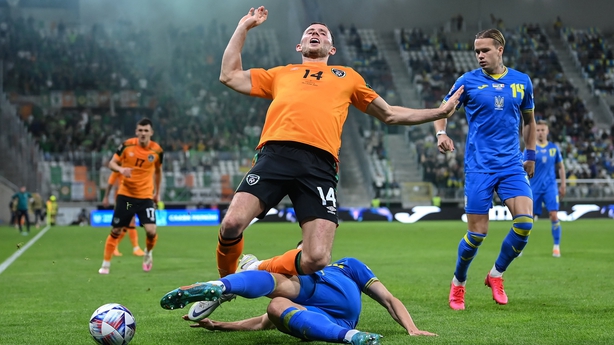 Started well but was brutally exposed by the run of Vitaliy Mykolenko in the first half, thankfully Kelleher saved well to save the Corkman. Threatened going forward with driving runs. Cautioned in the second period for taking down Mykola Shaparenko at the edge of the box. Did well in the absence of Seamus Coleman, Matt Doherty and Cyrus Christie. 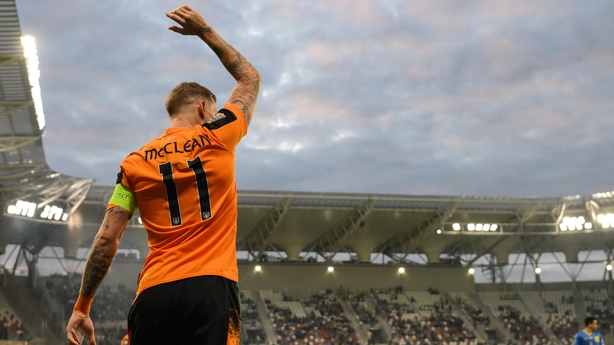 The Derry-man captained Ireland on his 94th cap, and offered balance and energy on the left wing. Composed in possession, his crossing wasn't quite as good as what it was against Scotland. He was probably caught too far up the pitch for the Ukrainian equaliser. His experience and performances mean that he is probably the number one candidate ahead of Enda Stevens in that position on the left. As Stephen Kenny mentioned in his pre-match press conference, he is getting better with age. 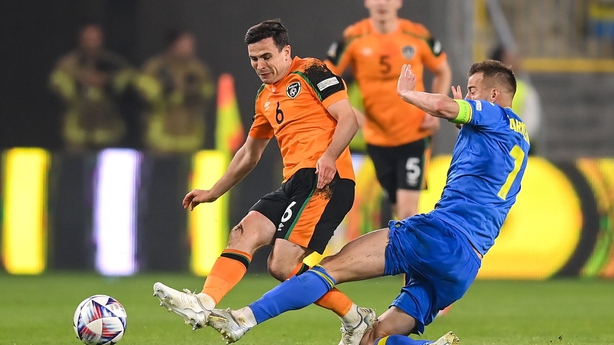 A loose touch in the first half caused the Anderlecht midfielder to challenge Malinovskyi who went off injured. Pressed well and has now become a fixture of the Irish midfield. His setpiece delivery was average. Was on the end of a bad challenge from Yarmolenko in the second half but it didn't shake him one bit. Managed to maintain possession under pressure from the Ukrainian high press .Played yet another 90 minutes for Stephen Kenny. Undroppable. 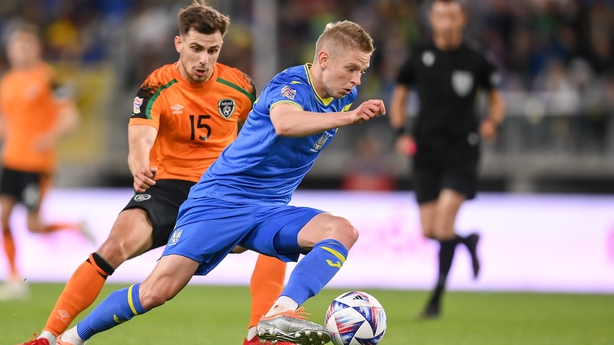 Provided bags of energy, tracked Oleksandr Zinchenko all over the pitch. Won the ball high up the park from Zinchenko that created a chance for Parrott. Doubled up well on the right to help out his wing-back Alan Browne. Defensively Molumby does his best work, but has to improve his attacking threat to nail down his spot in the team. Has shown a level of maturity in the Irish midfield that was perhaps found wanting in campaigns previously. 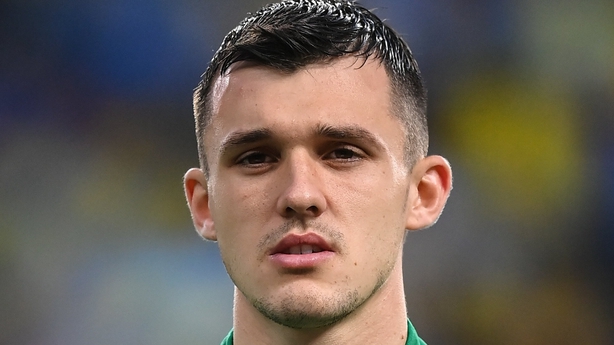 Knitted well between the midfield and the front players, stood up a lovely cross for Troy Parrott at the back post that he should have done better with. Had a chance to double the lead before half-time but saw his 20-yard shot well saved. Now has become one of the first names on the team-sheet in this international window. Dribbled out of defence a couple of times, comfortable on both feet and in a number of different positions. Combined well with Parrott, there is a partnership starting to develop there. 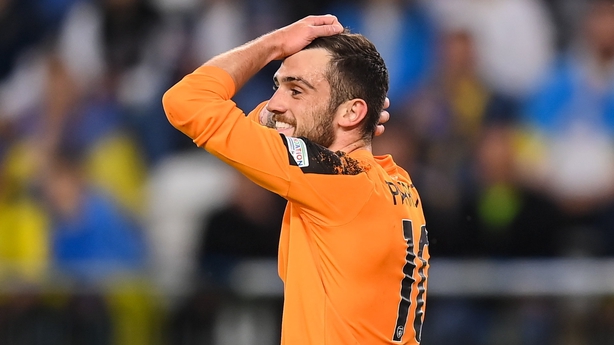 Pounced on possession well in the first half, should have got his header on target to put Ireland ahead. Constantly offered an outlet to his midfielders and defenders in possession. His versatility allows his manager to trust him on the left, on the right and through the middle of Ireland's attacking moves. Had an effort that was deflected wide, but will still be kicking himself for not getting his first half effort at least on target. 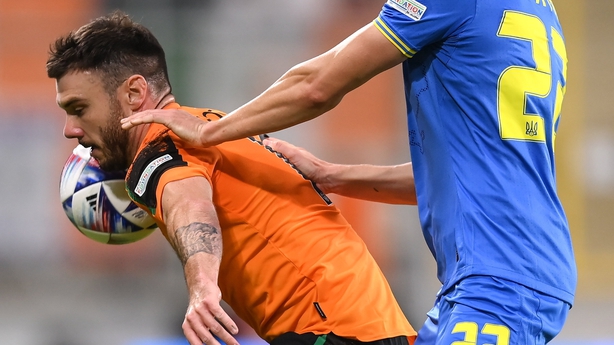 Stretched the pitch for Ireland by constantly threatening in behind the Ukrainian defence. Pressed well in conjunction with Parrott and Knight. His hold-up play was fairly ok but never had an opportunity created for him. Picked ahead of Callum Robinson somewhat surprisingly but probably does a better shift out of possession than his team-mate Robinson. Replaced just before the hour-mark after picking up a slight knock just before half-time.

Jeff Hendrick for Molumby (67) - Nearly threaded Parrott through on goal with a good through ball. Quiet other than that. 6

Conor Hourihane for Knight (67) - Smashed a long range effort well wide, got caught on a counterattack near the end of the game. Had claims for a last-second penalty waved away. 5

Chiedozie Ogbene for Parrott (80) - Threatened the Ukrainian back line with his pace and hold-up play. 6 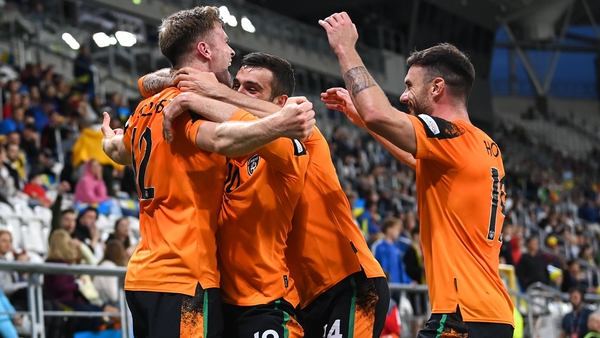