By Ed Leahy at Lodz

Dublin airport was flocked with football fans in the early hours of Sunday morning, but not of the Boys in Green variety, rather the Tartan Army, licking their wounds and rubbing their heads after an eventful but ultimately disappointing trip to the Irish capital.

Thankfully for our Scottish brethren and for all looking to get through security lines, the horror stories of out-the-door queues and understaffing did not materialise, and we were all through to Duty Free land with the minimum of fuss.

But wait. Were these kilt-clad sobering soldiers deserting the ranks and joining forces with their Celtic cousins?

The flight to Warsaw was full of Scots, as it happened, but while it was the Polish capital that was the route, it would only prove their first stop on the monster road to Yerevan, with a ten-hour wait and an airport change to negotiate, still leaving plenty of time to mull over that disappointing performance against the Irish.

The two-hour road trip to Lodz did not seem so bad now as we rolled towards Poland's third largest city, located slap bang in the centre of the country – the Athlone of Poland, perhaps, midway between Warsaw and the town the Irish took over in 2012, Poznan.

Two nuggets of knowledge were proffered from our genial driver as we wound down the journey to city centre hotel; Lodz is famous for its national film school – Roman Polanski a famous graduate – and the town of Lodz is not how it might appear, for it is pronounced Wudge!

A town that grew up in the industrial revolution and also experienced its fair share of World War II horror, it is also famous as the setting for the 1899 novel The Promised Land by renowned Polish author and Nobel laureate, Wladyslaw Reymont.

The book is about a Pole, a German and a Jew who are looking to build a factory in a heartless world of labour exploitation…alas, it didn’t make the reading list for this particular journey.

Lodz was finally confirmed as the host city for Ukraine’s home Nations League games, but it almost never happened due to a one-time renowned Spanish goalkeeper turned crooner, Julio Iglesias, whose concert was clashing and leaving a lack of hotel space in the city.

A song reference should naturally follow here, but with Begin the Begin the only Julio song coming to mind, and Google clarifying the second Begin is actually Beguine, a Caribbean foxtrot, as it happens, we’ll just park it.

But the dance will begin at the impressive, if compact, LKS Stadium in the heart of Lodz, where Ukraine will play their second game in a week, having beaten Armenia here on Saturday.

The stadium is a great football venue - home to LKS Lodz - and while it is not expected to be full, a sizeable Ukraine contingent will be present, combined with local support and the travelling Irish, it should surpass the 12,503 that attended the Armenia game.

Ukraine coach, Oleksandr Petrakov, spoke beautifully about the city and how they have made his team feel right at home for the week, while unable to play games back in the war-torn homeland.

Petrakov picked the venue personally and said that it was great to be able to meet up with friends and family after the Armenia game and enjoy a night out in the city centre after the game.

The coach was speaking at the pre-match press conference, and when word came through the translator that several members of the squad were carrying temperatures, the Covid alert was naturally raised and clarification called for.

"Not Covid, definitely not" was the reply, with the coach saying that it was the result of "the cold rain in Wales" following their World Cup play-off defeat.

The cold rain reference made fellow top-table attendee, Everton defender Vitaliy Mykolenko, smile; his six months living on the banks of the Mersey, no doubt, handing him natural immunity from such inclement conditions.

Needless to say, some of his team-mates might not be able to do it on a "cold, rainy night in Stoke".

Next man in was someone who could certainly stir it up in Stoke, former Potters player, James McClean, who sat alongside Ireland manager Stephen Kenny.

A great bond between the two was evident, with Kenny really stressing how impressed he has been with McClean’s conditioning to stay at peak fitness and maintain his place in the squad.

The sweet science as it turns out, as McClean revealed his passion for boxing has helped him to stay in shape while doing something that he really loves.

Despite talk of 800 Irish making the journey for the game, there really is a lack of usual matchday euphoria about the place – the late destination confirmation probably hampering most who were looking to travel.

There’s always more, however, as the Irish have a natural knack of working their way to support the team, with the mainland European diaspora also set to add to the numbers.

It’s the end of a long season and a draining four-game international window, but if somehow Ireland can produce a victory and end it on top of the group, well then the Beguine can certainly begin.

Follow Ukraine v Republic of Ireland (Tuesday, 7.45pm) via our live blog on rte.ie/sport or on the RTÉ News app. Watch live coverage on RTÉ2 and RTÉ Player commencing at 7pm with radio commentary on Game On 2fm. 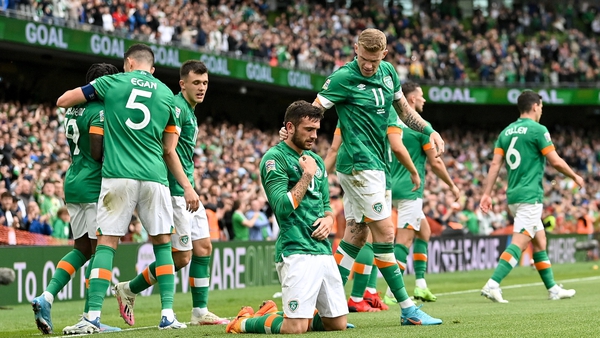 Ukraine v Republic of Ireland: All you need to know