Nicolo Zaniolo scored the only goal of the game, firing home from his side's first chance in the 32nd minute as Mourinho’s men sealed their first silverware since the 2008 Coppa Italia.

"Winning is very difficult. You need many ingredients," Mourinho said in the post-match press conference.

"Our team has played 55 games. We reached the final being tired, but we worked on it, kept it hidden. This is a fantastic group of players, that makes me emotional.

"We struggled in the second half, our opponents played well and they forced us to make defensive changes. Congratulations to Feyenoord."

It proved a typical Mourinho-style triumph as Roma sat deep and soaked up plenty of pressure before cruising through the second half with the minimum of fuss.

"Playing a final is not writing history, I told the players about the finals I lost in the past. We won, the players gave everything," the Roma manager said.

"One thing I said when I came here was I was going to help the team get to the final and one day I want to win a trophy. In my first season I have achieved that," Abraham told BT Sport.

Former Manchester United centre-back Chris Smalling added: "We knew how much it was going to mean to everybody in Rome, and you can see how together we are, everybody fought until the end."

Feyenoord coach Arne Slot admitted his side struggled with their decision-making as they slipped to the 1-0 defeat.

"In that phase we had good control of the match. But a half is 45 minutes long. And our problems were to do with the choices our players made, with and without the ball. 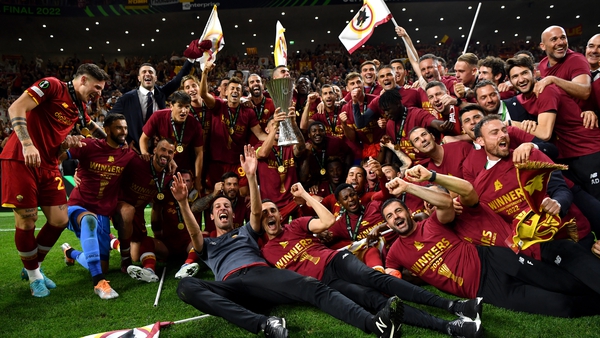