Republic of Ireland boss Stephen Kenny has described the upcoming clash with Ukraine as "a significant game in modern history" in the context of Russia's ongoing invasion of the country.

Ireland play Ukraine twice next month – once in Dublin, and then again at the neutral venue of the LKS stadium in Poland.

Kenny has aired his sympathy for Ukraine before. Appearing on The Late Late Show back in March, he said: "Ukrainian people, they've been incredibly brave. The dream is we play Ukraine and they’re an independent state, that they come through this."

The Dubliner further reflected on the situation after naming his squad for the Nations League quadruple-header in June, adding that Ukraine's football team can help keep the dire situation in the public consciousness

"It's a tragedy. Russia has invaded Ukraine. It's a war," said Kenny.

"The home game, in 50 years' time it will be a significant game in Irish football history. Thousands have died in Ukraine; thousands more will die. You know, we've seen the situation where Ukrainian people from Ireland have gone to Ukraine to defend their nation and they've died.

"President Zelensky has made the decision to let the Ukraine national team let the country represent the country at this time, and I think he's right. People can get fatigued, forget it and switch off from the war.

"Ukraine playing highlights that. From history we have learned that when one country invades another, it doesn't stop there. Russia aren't just talking about invading Ukraine.

'In 50 years time, this game will have historical context' - Ireland manager Stephen Kenny tells @Corktod that Ukraine’s continued involvement in football keeps the war at the forefront of people’s minds ahead of Nations League fixtures pic.twitter.com/SpdlZyuPgn

Ukraine face Scotland in a World Cup semi-final play-off next Wednesday. Victory would set up a final showdown against Wales four days later.

Ireland face both Ukraine and the Scots in their Nations League group – plus Armenia – and Kenny is braced for a real challenge.

"I think most neutral observers would view us as third favourites behind Ukraine and Scotland. That's probably a fair assessment, but we'd love to win the group. That would be our ambition.

"We know if we could achieve that it would give us a second seeding in the European Championship draw and also get us promoted to the A league in the Nations League, which is the real top table. It's where every country aspires to be.

"All the teams are capable of taking points off each other. We want to try and fulfil our potential over the six games." 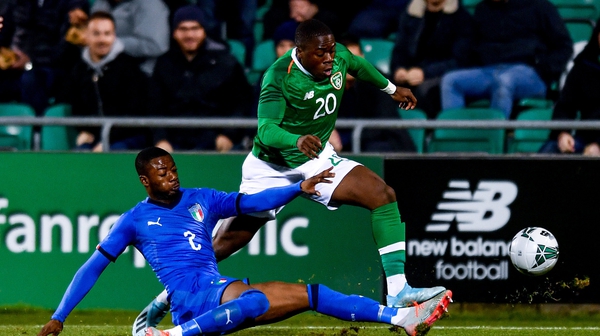 'Charismatic' Obafemi back in Ireland fold, CJ Hamilton gets the call