Republic of Ireland international Clare Shine says she has never been happier after battling with drink and drug addictions that led to attempts to take her own life.

The 27-year-old, who earlier this week signed a one-year contract extension at Glasgow City, keeping her there until the summer of 2023, has charted her struggles and recovery in her recently released book, Scoring Goals in the Dark.

The Under-19 International Player of the Year was a gifted all-round sportsperson from an early age before deciding to concentrate on soccer with the ultimate aim to pull on the green jersey of Ireland.

From the outside, she looked like a confident young sportswoman rocketing towards the top of her profession, but in reality things were beginning to unravel.

Speaking on RTÉ's The Ryan Tubridy Show, Shine said that one game in the Netherlands, where she was injured and confined to the role of a supporter of her team-mates, was an example of her life spiralling out of control.

"It was a whirlwind in my life at that time," she said.

"I had no control over my decisions. My addiction really started to affect me.

To be watching the team that I was dying to be involved in, drinking a bottle of wine, you know there is definitely something wrong

"I just wanted to have a good time and it took complete control over me and I ended up turning up to the game under the influence. I don’t really have a lot of memory from that.

"I remember sitting in the stand trying to hide the fact I had a bottle of wine in my bag from my parents and supporters.

"To be watching the team that I was dying to be involved in, drinking a bottle of wine, you know there is definitely something wrong, but I didn’t care what people thought of me. I didn’t care about anything, only where I was going to be able to have a good time and there was nothing that was going to get in the way of that."

The Cork striker is now in her second stint at the Scottish club, having scored 67 times in 99 appearances overall, but she has come through dark times to continue her sporting journey.

In her book, Shine says she would turn up to training after being in the pub and go to games after nights out. Ultimately, she didn’t feel there was anyone she could turn to who had gone through something similar.

"I just accepted that this was my life.

"I knew I was struggling, I knew the decisions I was making were wrong, but I had no power to change any of it. I think that’s the power of addiction."

Shine was resorting to putting wine into an empty water bottle to mask her addiction, but things came to a head in October 2018 when she made an attempt to take her own life.

"There were loads of nights where I lay in bed and would think about it (suicide). I drowned the thoughts out with drink and drugs.

'I remember sitting in the stand trying to hide the fact I had a bottle of wine in my bag from my parents' - @FAIreland and @glasgowcityfc striker @ClareShine01 tells @RyanTubridyShow about a real low point in her addiction struggle pic.twitter.com/4Ojn9Wvb1x

"I was doing things I thought were helping me, but they were just feeding those thoughts and addiction and mental health in the wrong ways.

"I was intoxicated that night and it triggered something in my mind. I thought it was the right thing, the only way out for me.

"It was an eye-opening experience because I knew I needed help and had to reach out. I knew I had to change my lifestyle and that’s when my recovery really did start."

Shine has spoken about these experiences before, but after the start of the pandemic, she relapsed and in 2020 made a second attempt on her life.

"I found that really hard to accept. I didn’t want to admit I had fallen so low again."

After a month in hospital, she started the road to recovery once more.

"When you start doing the right thing and right decisions, you do start to see light, you become more self-aware. I’m more aware of my self-triggers. My recovery comes first, everything else comes second.

"When I don’t look after myself, I tend to go back to the way I was. That’s the harsh reality of mental health and addiction.

"That’s my approach to my mental health and addiction. If I don’t keep on track of it, it will take me back down that road, and it’s a road I never want to go down again.

"It’s a journey I will be going through for the rest of my life."

Last September she returned to the Irish senior squad scored 10 goals in 27 appearances this season for a Glasgow City side denied 15 in-a-row when Rangers won their first-ever Scottish Women’s Premier League title earlier this month.

They will have a chance to end the season with silverware when they take on Celtic in the Scottish Cup final on Sunday at Tynecastle.

There is a positive outlook both on and off the pitch.

I love my own company now

"I’ve never been happier, never been so comfortable in myself. Going through recovery, you learn so much about yourself.

"I love my own company now. I love listening to podcasts in a coffee shop, it’s one of my favourite things to do. Whereas before, I was never able to sit on my own with just my thoughts.

"That’s the most incredible thing for me."

If you have been affected by any of the issues raised in this article, you can find helplines and other support services here. 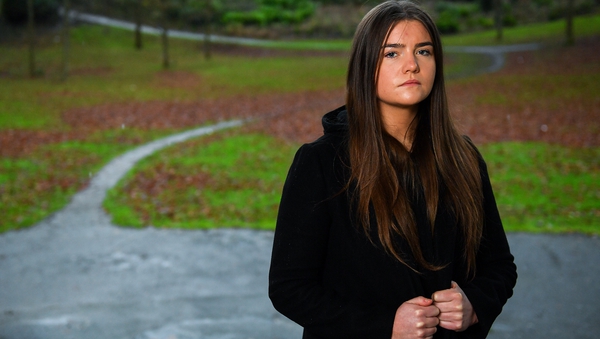 How Clare Shine emerged from her darkest hour