It has been a fantastic few weeks for Shamrock Rovers.

You have to go back to the first week of March for the last of their two defeats this season. Since then they have racked up 33 points in 13 fixtures.

They go to a Drogheda United team who picked up a much needed win against Finn Harps on Friday night.

Derry City's form, on the other hand, has collapsed. Two points in their last four games has seen them slip seven points behind the Hoops and Ruaidhrí Higgins' men are at risk of extricating themselves from a two-horse race.

The Candystripes face a Sligo Rovers side who are on the hunt for a new manager after parting ways with Liam Buckley yesterday.

Two wins from 12 games has left the Bit O' Red in the bottom half of the table, but still only seven points from third, and a guarantee of European football.

There are also two Dublin derbies up for decision. St Patrick's Athletic host Bohemians after Friday's disappointing loss to Shelbourne.

Fourth-placed Pat's are without win in their last three games, and Bohs will know a win by two clear goals will see them leapfrog their hosts in the table.

Over at Tolka Park, Shelbourne have pulled away from the bottom three over the last few weeks, with three victories on the spin. Another tonight could see them into the top half if things go their way.

They welcome UCD, who are desperately struggling for goals, across the Liffey. The Students suffered a further blow in their fight to avoid the drop when star striker Colm Whelan had his worst fears confirmed with an ACL injury.

It will be up to others in Andy Myler's young squad to step up to the mark and start hitting the back of the net.

The late game of the night will see Finn Harps entertain Dundalk in Ballybofey. Ollie Horgan's team are in the worst form in the league. Three points from their last five games mean they're giving the Students behind them hope of a battle for ninth place.

The Lilywhites are hunting down Derry in second place, and their form in the last five games matches that of leaders Rovers; 13 points from five games.

Shamrock Rovers are on the road to take on eighth-placed Drogheda.

They're facing a second consecutive away day after Thursday's victory at Belfield.

"It was a difficult game between two teams that were trying to cancel each other out but they came out on top. It was a good win for them and it'll give them a lot of confidence coming into the game.

"We saw with the three goals that they scored that they have some good players in the attacking part of the pitch."

Roberto Lopes will miss the game through suspension, while Jack Byrne and Lee Grace are fit.

Dean Williams is a doubt for Drogheda while Darragh Nugent cannot feature as he is on loan from tonight's opponents.

The Shamrock Rovers game has come too soon for midfielder Darragh Markey though, who has been sidelined with a fractured metatarsal.

But speaking after their win over Finn Harps, manager Kevin Doherty suggested Markey's return is close: "He's back more or less, he'll be back in the next couple of weeks. He'll certainly be back after the break. It's massive. Darragh is one of the best players in the league in my opinion so to have him to come back in as well... it makes such an impact on us."

This is a north-west derby that's important for each club for different reasons.

Sligo are beginning the post-Liam Buckley era with John Russell in charge for an interim period.

''A lot has happened in the last 24 hours but the players have worked extremely hard this morning and are fully focused on the game tomorrow night," Russell said.

"Derry have had a strong start to the season so we know it will be a difficult game but we have a lot of quality in our group and the ability to get a result especially being at home in The Showgrounds with our fans behind us."

Max Mata continues to recover from injury while Shane Blaney and David Cawley are doubts.

Derry's title aspirations are in serious danger after their recent run, and they can't afford to continue their slide.

"Every team has a period in the season that's difficult and there's no doubt this is a difficult period that we're going through," said Candystripes boss Ruaidhri Higgins.

"But we have great personalities and characters in the dressing room and it wasn't always going to be beautiful and rosy so now we need to grind out a win and try and get the show back onto the road." 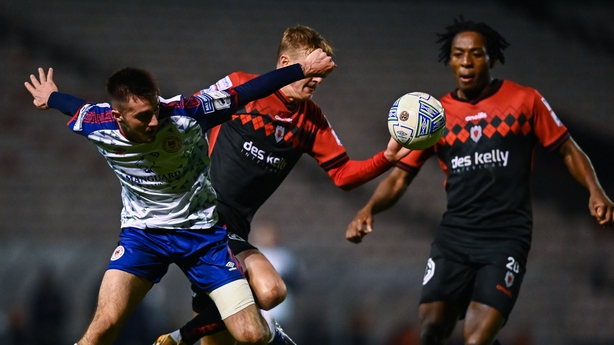 Last year's cup finalists take up residence in relative proximity in the table with both sides enduring inconsistency.

St Patrick's Athletic, who along with Derry, had been tipped to push Shamrock Rovers closest, find themselves well adrift of those lofty goals in fourth, three points ahead of Bohemians who have a game in hand.

The Saints have just one win in five since beating Finn Harps this time last month and lost 2-1 to Shelbourne last time out on Friday.

"We need to find better decision-making and we need to be more solid in defence," Pat's manager Tim Clancy said in the wake of that defeat.

He did confirm that Udinese-bound defender James Abankwah "should be fine" for tonight and is hopeful Chris Forrester can feature after sustaining a knock versus Shels.

Unavailable tonight but not too far away from a return is Paddy Barrett, while Jamie Lennon is back running.

Bohs, meanwhile, had a better Friday night as they beat Sligo Rovers 2-0 and could have Liam Burt, who has been nursing a groin injury, back to face Pat's having not been risked last time out.

"We've just got to live like monks and do what we can between now and Monday to make sure we're prepared," said Bohs boss Keith Long after the win on Friday.

"It's a Dublin derby, we always bring brilliant support across to Inchicore. It's a great place to play football - a nice compact, tight ground.

"Generally it's a good pitch so we want to go over there and if we can, and I said it to the boys after the game (against Sligo), repeat that win after winning, and I think that's something that we haven't quite done this year." 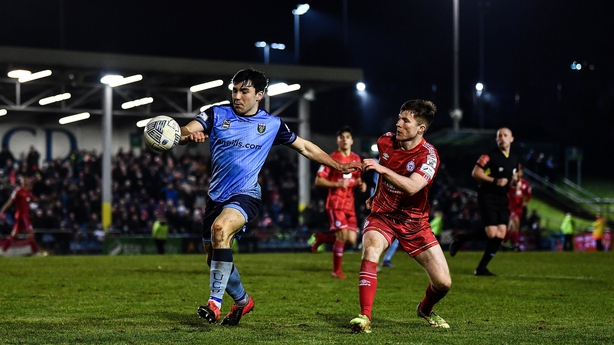 Shelbourne suddenly find themselves on a run of three wins in succession and will hope to make that four when they take on bottom side UCD.

The previous meeting between the sides in February ended in a goalless draw. But having turned their form around at Tolka Park of late, Damien Duff's side will fancy their chances.

"The team's growing, lads are getting used to the training and used to the demands," said assistant manager Joey O'Brien on the club's form.

"For a lot of them, it's the first time playing in this division, playing in places like this. I think they're growing really nicely and it's a quick turnaround to Monday so you just park this and move onto the next game."

UCD were beaten by champions Shamrock Rovers via three early goals on Thursday but their manager Andy Myler had his sights set beyond that fixture to more tangible targets.

"We need to move on from tonight and there's more important games coming up and that game tonight needs to go to our past pretty quickly," he said.

The Students will definitely be without Ireland Under-21 forward Colm Whelan after his recent season-ending knee injury.

Finn Harps are badly in need of some points to keep thoughts of finally finishing in last place out of the back of their mind.

Losing to eighth placed Drogheda on Friday, having been ahead on the night, will have been a set back.

"Dundalk are flying at the moment and will be full of confidence after their win over Derry City on Friday," manager Ollie Horgan said.

"The result in Drogheda was tough to take given the position we were in but we can't feel sorry for ourselves. There is still plenty of football to be played and we need everyone focused on putting in a big shift Monday night.

"We’ll need our supporters in the ground to give us that extra lift when we need it, as they have time and again over the years."

David Webster is definitely out, while Bastien Héry is suspended. Barry McNamee and Elie-Gael N'Zeyi are doubts for the game.

Dundalk, who will have defender Andy Boyle back from suspension, have risen to third after a landmark away win at Derry but Stephen O'Donnell's side are not taking their good form for granted against a side currently struggling to pick up results.

"No matter where Harps are in the league, it's always a tough game in Ballybofey. I know that first hand," said O'Donnell.

"We're full of confidence, everyone is playing well and even though we’re buoyed by the win at the Brandywell, Monday’s game is the focus now and it will take on a meaning of its own.

"We have back-to-back long journeys to the north west so the most important thing is that we’re fresh and ready to go."