By David Sneyd at UCD Bowl

Shamrock Rovers had the three points and a seven-point lead at the top of the SSE Airtricity League Premier Division wrapped up after just 17 minutes away to UCD.

But this routine 3-0 victory at the home of the bottom club still came at a cost when talisman Jack Byrne limped off injured before half-time.

After some prolonged treatment on the touchline, Rovers boss Stephen Bradley made the decision to call him ashore. There was no need to risk further damage.

Byrne had already proved the inspiration for the first-half goal glut, delivering a fine diagonal cross for onrushing right-wing back Barry Cotter to tower above John Ryan and loop a header into the far corner.

It was a superb delivery from the Republic of Ireland international, but his technique was quickly outdone by striker Rory Gaffney, who produced a stunning outside-of-the-right-foot pass from the left flank to split the UCD defence wide open.

The vision was superb and the execution perfectly weighted for Danny Mandroiu to prod home the second in the middle of the box.

Rovers could now afford to enter energy-saving mode while Derry City, their title rivals at the top, had no reason to continue watching in hope of an upset.

The Candystripes look primed to be the main contenders but, having lost at Tallaght Stadium last Friday and with Rovers following it up here, the gap is now a pretty significant seven points.

By no means insurmountable, of course, yet if they cannot see off Dundalk at the Ryan McBride Brandywell Stadium tomorrow night it will seem like a much more daunting prospect to rein in the three-in-row chasing Hoops.

They are now unbeaten in 13 games - 10 wins from their last 11 outings - and this away day on Dublin's southside was never a concern.

There was a slight reminder of UCD's threat in the final third when Liam Kerrigan took a ball over his shoulder into his path with a delicate first touch, but his second was a wild shot that sailed over the bar in the 21st minute.

He should have hit the target, at least, yet it will not be looked back on as a crucial moment.

Rovers’ class was evident although Byrne did pick up a yellow card for a poor challenge on Kerrigan prior to the half-hour mark.

His injury may have been picked up in the incident and no risk was taken. It was a night of little worry for the champions and when substitute Greene teed up Gaffney in the six-yard box four minutes before the interval extra gloss was added.

Bradley may be annoyed that they couldn’t continue those exploits in front of goal, especially as Derry put seven past UCD only last month, but perhaps his triple substitution at the break played a part in a more lacklustre affair.

Still, Rovers had already made their point as they get comfortable at the top once again. 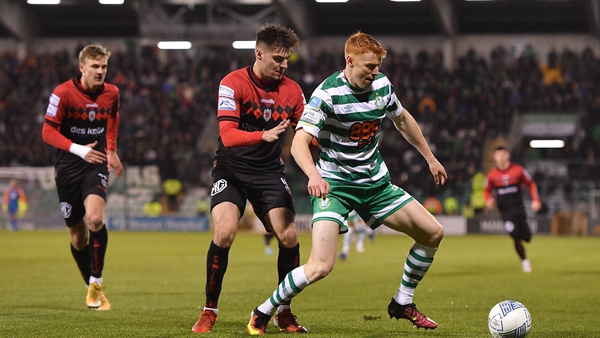 Hoops-Bohs derby to be screened live on RTÉ