Ollie Cahill has tipped Danny Mandroiu to work his way back into Stephen Kenny's thoughts if he continues on his "current trajectory".

While he did not ultimately feature in the 2021 June friendlies against Andorra and Hungary, Ireland manager Kenny's decision to draft him in suggested that the now 23-year-old is somewhere on his wider radar.

Ahead of Friday's top of the table clash in the SSE Airtricity League Premier Division between Mandroiu's Hoops and Derry City which will be live on RTÉ2 and the RTÉ Player, the player has shown good form.

His brace against Finn Harps last Friday was his fifth goal in 13 league appearances, while he has also registered three assists.

Ireland return to action in June with fixtures in the UEFA Nations League and although those games may come too soon for a Mandroiu call-up, ex-Shamrock Rovers, Drogheda United and Bohemians winger Cahill believes the player has unique characteristics that could be useful for the Boys in Green.

"He's young (and) in good form and (for) Ireland, we need players like that," Cahill told this week's RTÉ Soccer Podcast.

"They're the types of players we need in the international set-up."

Cahill believes Mandroiu is showcasing a different facet to his game this season as well as the way he has been dovetailing with another player tipped for an international recall.

"The thing that struck me about him just seeing him this year is the relationship he has with Jack Byrne," he said.

"That goal against Dundalk, that ball from Jack (was excellent) but if Danny doesn't make the run, the ball isn't on. And the ball the other night (against Finn Harps) from Jack, Danny is making that run from how many yards away but knows if Jack is on it, 'if I make a run here, he can find me'.

"He seems to have gone to the next level really. We all know he had ability and talent but since he has gone to Rovers, he seems to have taken it on.

"If he keeps on going on the current trajectory, there's no reason why he can't be getting in and around squads"

"But I think in the international team, we need players like that. We need your Danny Mandroius, your Jack Byrnes that can have that little bit of an X-factor that can open up those teams.

"Stephen Kenny will be well aware of him and will have watched him regularly. It will be interesting to see how it pans out.

"But if he keeps on going on the current trajectory, there's no reason why he can't be getting in and around squads. I'm not saying he's going to be starting or anything but making some kind of impact."

Also speaking on the podcast, former Drogheda and Shamrock Rovers defender Graham Gartland touched on Mandroiu's deceptive turn of pace which can go under the radar due to his general style of play.

"When I saw Danny play as a kid and then saw him again when he came back, he used to come towards the ball and get involved in the play," he said.

"Where I think this year and a little bit last season, he's actually willing to run in behind a lot more and his pace is ridiculous.

"I didn't realise he was as quick as that until I saw him open up one of the games, I think in the Pat's game last year, when he nicked the ball off (Lee) Desmond and took it from the half-way line, held Desmond off and scored.

"I said it to (Shamrock Rovers manager) Stephen (Bradley) afterwards I didn't think he was as quick as that and he said, 'Yeah, he can motor Graham' and I think now that you see the likes of Jack dropping in and his head comes up, he knows I'm going to hit the grass and Danny will get there."

We need your consent to load this rte-player contentWe use rte-player to manage extra content that can set cookies on your device and collect data about your activity. Please review their details and accept them to load the content.Manage PreferencesWatch Shamrock Rovers v Derry City in the SSE Airtricity League live on RTÉ2 and RTÉ Player on Friday night (7.45pm) or follow via our live blog on RTÉ.ie/Sport and the RTÉ News app 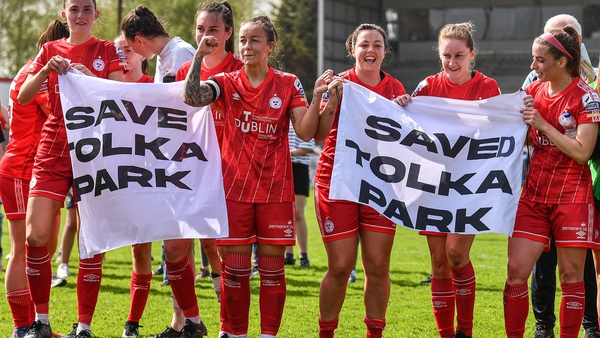 Ollie Cahill and Graham Gartland: Tolka Park saved, time to fix it up