Dublin City Council have denied reports that a decision has been taken to change the plan for the refurbishment of Dalymount Park.

A report in the Irish Daily Star this morning stated that DCC were revising their ambitions for the stadium, which would lead to maintaining the current Jodi Stand and building two new seating structures.

The Dalymount redevelopment, which is projected to cost €34.3m in conjunction with the redevelopment of Phibsborough Shopping Centre, has been hit by delays.

That costing is likely to rise considerably given the price of material and labour has jumped markedly.

The government awarded funding of €918,750 in January 2020 to facilitate the appointment of architects, engineers and a design team to work alongside project managers to bring the proposal forward.

In a statement, the council said that process is close to completion and only then will an update be provided.

Dublin City Council are also in talks with Shelbourne and St Patrick's Athletic over help with refurbishing of their stadiums.

Shels are set to take back ownership of Tolka Park following a move by their new owners.

Dublin City Council stated: "We would like to clarify that, contrary to some media reports today, there has been no change in the preferred and planned redevelopment of Dalymount Park into a 6,000-seater facility with ancillary community facilities.

"The project is at an important juncture where the appointed design team of IDOM/Gilroy MacMahon are close to completion of the preliminary design and an order of magnitude will be provided in the coming weeks.

"Underground investigations are to be conducted on site over the next week. Once this information is available the design team will have a good understanding of the substructures that are required and the Quantity Surveyor will be able to provide accurate costings for the proposed design by the end of June.

"Once this report is complete the City Council will be in a position to complete their due diligence on the costing and a decision will be made whether to proceed to detailed design and planning with the current design or alternatively a value engineering exercise will be completed which could potentially lead to some redesign.

"All stakeholders have always been aware, and particularly in light of ongoing inflationary pressures, that should costs escalate to an unsustainable level there would need to be alternative options on the historic site.

"These options could potentially involve redesign and would utilise all studies and works already undertaken and stay within the current funding mechanism. The demolition of the disused Connaught St Stand is currently out to tender which follows the demolition of the Des Kelly Stand.

"Dublin City Council is still fully committed to a redeveloped Dalymount Park and will continue to work with all stakeholders including local councillors, Department of Tourism, Culture, Arts, Gaeltacht and Sport, Bohemian FC, the local community in Phibsboro and the FAI to provide a municipal stadium at Dalymount Park."

Bohemians released a statement echoing the DCC's points, claiming a preliminary design for the new stadium would be due 'imminently'.

"The Board of Bohemian FC has always been aware, as with any project funded by public monies, that should costs escalate to an unsustainable level that there would need to be alternative options on the historic site.

"These options could potentially involve redesign and would utilise all studies and works already undertaken and stay within the funding mechanism of LSSIF and DCC as combined sources.

"Such a redesign could also deliver a higher capacity facility without the need for a long period out of Dalymount Park where we have played continuously since 1901."

The council added that negotiations are ongoing with Shelbourne over acquiring Tolka Park from on a cost recovery basis. 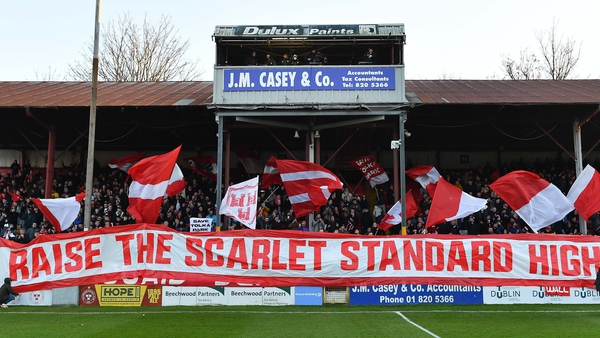