Republic of Ireland defender Chloe Mustaki hopes her performance against Sweden will mark the start of a long and successful international career after making her competitive debut.

Mustaki played a starring role in Ireland's hugely impressive 1-1 draw away to the best team in Europe.

It was only the 26-year-old's second appearance at senior level for Ireland having made her debut against Russia in the friendly Pinatar Cup tournament in February.

The Shelbourne defender is now eager to make up for lost time, having overcome both cancer and an anterior cruciate ligament injury in recent years.

Speaking to RTÉ Sport, she admitted a sense of pride in both her performance against Sweden and her perseverance.

"I’m proud of myself," she said. "A year ago I was doing punditry for the girls and a year on, I’m starting.

"A few things went my way obviously with injuries but hopefully I took the opportunity showed Vera my potential and hopefully there’s a few more games to come.

"There’s no better opportunity to come in.

"I got a good lot of minutes under my belt with Shels at the start of the season which has probably helped me.

"I could have done with the game ending about ten minutes earlier but we dug deep, everyone did fantastic – what a shift. We sustained a lot of pressure but we kept them out and we defended with our hearts.

"There were a few cramps here and there, but we dug deep, we stayed tight within the lines and defended so hard. Everyone put their bodies on the line, you could see that. We didn't give them much and to be fair Courtney Brosnan was fantastic."

The game was played in front of a record crowd in Gothenburg who were on hand to see their side secure their place at next year’s World Cup, but Mustaki refused to let herself be overawed by the occasion.

"I didn’t even look up at any point at the crowd, she said. "I was just focused on the pitch the whole time. It was only when the whistle blew that I could have a look around and see how many people were here.

"But it was just another game like any other. Luckily I have a lot of international games via underage under my belt so I just used that towards my experience." 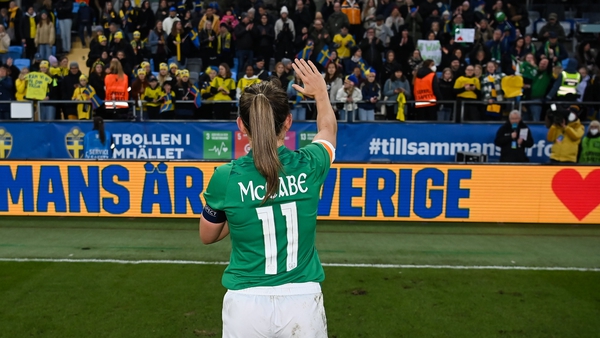 McCabe has Georgia on her mind after Swedish battle