A defiant Vera Pauw has said the Republic of Ireland "will not collapse" no matter what happens as they prepare to enter a Gothenburg cauldron in just under two weeks' time.

Ireland take on group leaders Sweden in a crunch World Cup qualifier on Tuesday 12 April [live on RTÉ2 and the RTÉ Player, 5.30pm] with their dreams of making a first ever major tournament delicately poised.

The Swedes - ranked No 2 in the world - have won all five of their games in Group A and are eight points ahead of second-placed Ireland, who have a game in hand. If the hosts beat Georgia on 7 April, they will know victory against the Irish at the 18,000-capacity Gamla Ullevi stadium will send them to the World Cup.

For Ireland, second spot and a play-off berth has always been the target. After Sweden they have a trip to Georgia in June before massive September games against Finland in Tallaght and Slovakia in Bratislava.

"Every game is crucial in this campaign because we are on the fringe of stepping up," Pauw said at the FAI's HQ in Abbottstown on Thursday.

"Sweden are ranked second in the world, that's not for nothing. They are very solid in the execution of their tasks. They're so determined to just do their task without any ego. That is very difficult to make a plan against. We have our plan of course, but it is a very, very tough task."

Part of that plan involves playing a League of Ireland boys' Under-15 side. Pauw confirmed her team will take part in a practice match next Thursday against the unnamed opponents who will be asked to mimic Sweden's formation and approach.

Ireland have played a Shelbourne underage outfit in the past to fine tune things, and with Sweden looking even stronger now than they did when they won 1-0 in Dublin last October, Pauw is looking to gain an edge wherever she can.

"The big chance was the first game," Pauw went on. "If you’ve seen them playing recently, all their players are fit. The first game they were missing a few players, they were just coming out of the Olympic Games so every player was very tired.

"Now you can see in their play they are fresh, they are lively, they are exciting to watch. It’s a great challenge and we’re looking forward to it.

"We have to be realistic and do everything we can to make a fantastic game of it. At the end we will see what the score is. We will not collapse, that is one thing."

Ireland will be without defender Savannah McCarthy, who suffered a cruel ACL injury blow in action for Galway 12 days ago. Her expected replacement Diane Caldwell has also been ruled out due to a thigh issue.

"It’s heartbreaking," Pauw said of McCarthy. "It’s a severe injury and we’ll do everything to help her recover. She was a different type of defender than the other two in the centre three.

"That’s why she was so important. First of all she’s a left-footer, but secondly she’s a completely different player. If you want to step up to the highest level you need different kinds of central defenders with all the abilities.

"Diane has a thigh injury unfortunately. We have an issue there [in defence]. On the other hand we have some players coming back. Megan Campbell, with load management, is fit to play. She’s doing well at her club. Harriet Scott is available, that’s a boost to the squad. We need to see what choices we make." 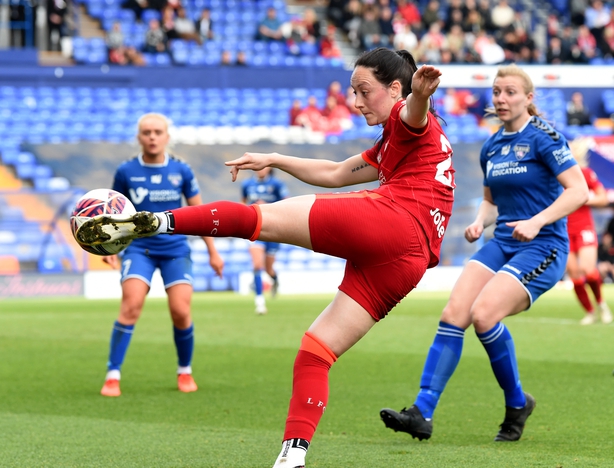 Campbell (above) - currently impressing for Liverpool - is being eased back into action as she returns to international football after a two-and-a-half-year absence.

The 28-year-old, who's suffered appalling luck with injuries, hasn't featured for Ireland since October 2019.

However, she's now back in the fold, with Pauw adding: "Megan was overloaded, she played too many games leading up to the Pinatar Cup [in February]. We saw her knee swelling up and decided not to overload her.

There's one newer face in the panel too as London City Lionesses midfielder Lily Agg gets the call.

The 28-year-old Brighton native qualifies through her Cork-born grandmother. She previously trained with the squad back in April 2021.

"Unfortunately, she got injured then," Pauw said. "Otherwise, we would have seen her earlier. She's a very good battler in midfield. Her biggest quality is her drive to constantly press, even though she's an attacking player.

"She doesn't let anything go, never has one moment of disappointment and she constantly puts the opponent under pressure. If it's not for the lineup, it's also important as an opposition player to have her in the squad and in the training sessions to play the opposition and put real pressure on." 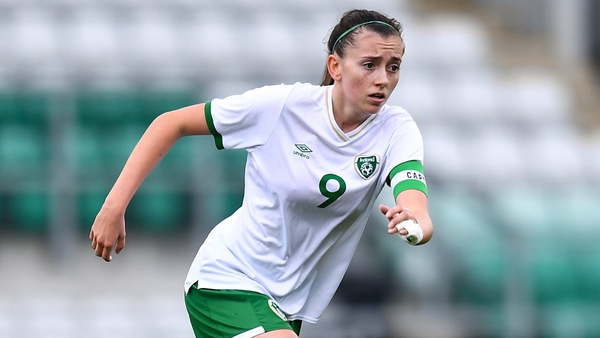 Shels teen Larkin in Ireland squad but Caldwell is out