Shelbourne 16-year-old Abbie Larkin has been named in the Republic of Ireland squad for the crucial World Cup qualifier against Sweden, but experienced defender Diane Caldwelll is the latest defensive injury blow for Vera Pauw.

Larkin made her senior debut at the Pinatar Cup in February and was this week part of the Ireland Under-17s team that fell short in their quest to make the European Championships.

Her Shels team-mate Chloe Mustaki also gets the nod having made her long-awaited debut at the tournament.

There is a first official call-up for midfielder Lily Agg, who qualifies through her Cork-born grandmother. The 28-year-old London City Lionesses midfielder previously trained with the squad in April 2021.

Caldwell looked likely to return to the starting side to replace Savannah McCarthy, who suffered a cruciate ligament knee injury playing for Galway United in a 1-1 Women's National League draw with DLR Waves 12 days ago.

However the Manchester United centre-half is ruled out with a thigh problem, while Niamh Farrelly (ankle), Emily Whelan (quad) and Aoife Colvill (knee) are also unavailable. Saoirse Noonan is continuing her recovery from a knee injury.

"Every game is crucial," Pauw said on Thursday morning. "We are on the fringe of stepping up. Sweden is ranked second in the world, that's not for nothing.

"We have our plan of course, but it is a very, very tough task." 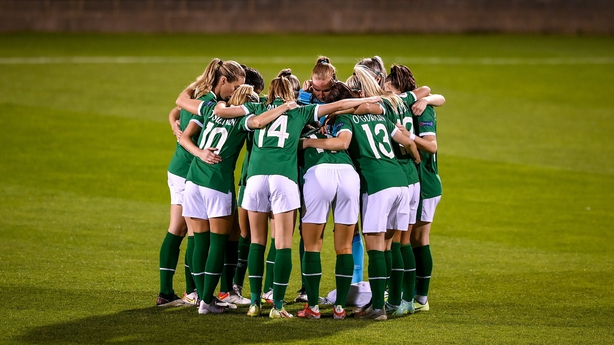 Ireland take on the Swedes in Gothenburg on Tuesday 12 April. They then face into a defining three-game run-in with a trip to Georgia in June before September showdowns against Finland in Tallaght and Slovakia in Bratislava.

Pauw's charges can brace themselves for a big atmosphere at the 18,000-capacity Gamla Ullevi stadium. The Swedes play Georgia on 7 April before the Irish come to town five days later, and could seal their qualification as group winners if they collect six points from those two games.

In November, Sweden beat Finland 2-1 in front of 13,429 fans at Gamla Ullevi, which was a record crowd for their women's side. That attendance is likely to be bettered for the visit of Ireland, who are currently second in Group A on seven points after four games played.

The squad will report into camp on Tuesday to begin preparations before flying to Gothenburg on Saturday 9 April.