Gareth Southgate said it was an "absolute joke" that Harry Maguire was jeered by some England fans and Jack Grealish called the treatment of his team-mate "ridiculous".

Having kicked off World Cup preparations with a 2-1 comeback win against Switzerland at the weekend, the Euro 2020 runners up boss made 10 changes for the friendly against Ivory Coast on Tuesday.

Under-fire Manchester United captain Maguire was among those brought in and was greeted by a smattering of boos at Wembley, where his name had received a similar reaction on Saturday.

There were even some jeers during the defender's first few touches of the ball in the 3-0 win against 10-man Ivory Coast - a baffling reaction that infuriated England's manager.

"I thought the reception was a joke, an absolute joke," he told Sky Sports.

"What he has done for us, the way he has performed for England, I don't get it. We are either in this all together or we are not."

Southgate not only felt the abuse of Maguire unacceptable but damaging to the rest of the England squad.

"I don't understand how it benefits anybody because we're either all in it together or we're not," the England boss said on a night when Ollie Watkins, Raheem Sterling and Tyrone Mings scored for the hosts.

"I would imagine if you asked a few actually why were they doing that they might not even be able to answer because it becomes a mob mentality.

"Of course at one end of the ground we've got a hardcore section of fans who are playing his song and trying to get his name sung, so I'm very aware it's not everybody.

"But we're either all in this together or we're not, and don't think for one minute the other players won't be looking at that thinking 'that could be me one day'.

"That's been one of the problems with playing for England. Players have thought 'hmmm, do I want to go because when it turns a little bit difficult then the crowd are going to turn on me'.

"We're united as a team. We need a Harry Maguire playing well if we're going to have a chance of doing well (in the winter) because we're not going to win a World Cup with a load of players that have got three or four caps.

"That's not happened in the history of the game so we need our experienced players playing well, particularly in those positions of the field. He's top quality. In my opinion, he's the best centre-back at his club as well. Where this is all starting or being fed (from), I'm not sure but it's ludicrous.

"It's almost like every time he steps on a football pitch every action is analysed to death. I can't remember a player having that sort of spotlight on them at any point."

Those sentiments were shared in the dressing room, with Grealish mystified by the reaction.

"Personally I think it's ridiculous," he said. "Harry's been unbelievable for this country in the World Cup, the Euros. I think even tonight he was brilliant. Our first two goals come from him.

"The first one him driving out with the ball and the second comes from him driving a little bit and then playing the pass into Ollie. Not every centre-back can have those qualities. He's been a fantastic servant for this country and he's been brilliant, so I think it was ridiculous for him to get booed and it wasn't something that the team liked."

Watch the draw for the 2022 World Cup live on RTE2 and RTE Player on Friday at 5pm with updates on RTE News app and RTE.ie/Sport 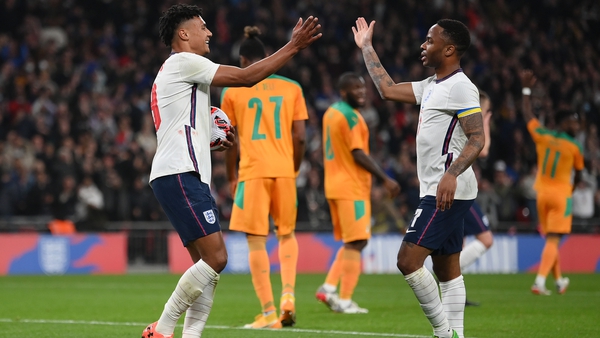 Raheem Sterling to the fore as England cruise past Ivory Coast