Stand-in skipper Raheem Sterling set up one and scored another as England cruised to victory in a friendly against Ivory Coast that felt more like a training match after Serge Aurier's sending off.

Gareth Southgate made 10 changes from Saturday's comeback win against well-drilled Switzerland as World Cup preparations continued with a first-ever senior international meeting of these nations.

Sterling crossed for Ollie Watkins' opener and added a second shortly after Aurier's first-half sending off, with many having left Wembley by the time Tyrone Mings headed home to make it 3-0 at the death.

Former Three Lions international Wilfried Zaha was absent from the Ivory Coast squad at Wembley, where the side ranked 51st in the world were second best from the outset.

Impressive Jude Bellingham hit the post before Watkins tapped in following excellent work by captain Sterling, who scored one of his own on the stroke of half-time after turning home a Jack Grealish cross.

The Ivorians had been reduced to 10 men minutes earlier after ex-Tottenham defender Aurier was sent off for two bookings and the second half began by giving away a penalty.

That decision was overruled after Fousseny Coulibaly's challenge on impressive Bellingham was reviewed, with paper planes raining down on the pitch as Southgate turned to the likes of Harry Kane.

Mings managed to score a third at the end of a drab second half as attention turns to Friday's eagerly-anticipated World Cup draw in Qatar.

That event will dominate the talk after Tuesday's friendly, while fans' initial reaction for Harry Maguire is also sure to be brought up.

A smattering of boos greeted the substitute's name on Saturday and there were more before kick-off against Ivory Coast as the under-fire Manchester United captain made his first international appearance of the year.

There were even some jeers during Maguire's first few touches of the ball - a baffling reaction to such a key member of Southgate's squad.

The atmosphere was otherwise subdued as England's superior quality shone through.

A great move saw teenage star Bellingham play an excellent one-two with Sterling, only to be denied his first international goal as Badra Ali Sangare turned his close-range shot onto the post.

England continued in the ascendancy as Grealish tested the Ivory Coast goalkeeper from an acute angle, before confident captain Sterling cleverly flicked the ball in the box and got away a blocked shot.

The forward continued to torment and unlocked the Ivorian defence on the half-hour following excellent footwork by sending a low ball over to Watkins to turn in from close range. 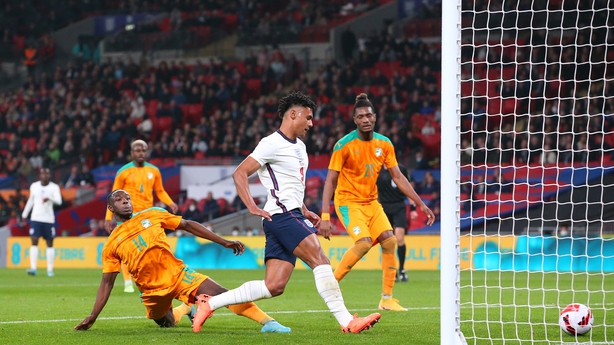 Declan Rice had a header on goal from a free-kick awarded after Jean Michael Seri hacked down Sterling and Bellingham bent wide before the edge got taken off an already one-sided friendly.

Having collected his first yellow card in the 32nd minute, Aurier received a second booking eight minutes later for dissent. Even Grealish appeared to be appealing for referee Erik Lambrechts to allow former Spurs defender to stay on. The decision ended the friendly as a contest and England added a second before half-time.

Sangare stopped Sterling's initial strike but the ball ballooned up in the air and Grealish cut back for his Manchester City team-mate to strike. The goal was given after a VAR review.

That Ivory Coast decided to take a shot directly from kick-off at the start of the second half underlined how desperate things were for the visitors, who made three changes at the break.

Coulibaly was among them and adjudged to have fouled Bellingham in the box, but the decision was overturned by referee Lambrechts after the VAR advised him to check the pitchside monitor.

Bellingham was playing with a swagger on an evening when Southgate made a quadruple substitution in the 62nd minute, including bringing on record-chasing Kane.

James Ward-Prowse whistled a 30-yard drive just over as England looked for what felt like an inevitable third as paper planes continued to land on the pitch.

Unmarked Simon Deli blazed over Ivory Coast's best chance of the evening from a 77th minute free-kick as fans headed for an early tube home.

It looked the only thing they would miss was Emile Smith Rowe's shot from a stoppage-time Kyle Walker-Peters cross deflecting wide. But from the resulting corner Mings rose to head Phil Foden's set-piece into the ground and the back of the net.