We are coming to that time when the first Republic of Ireland squad announcement of the year will be made.

And while there will be intrigue about possible newcomers out-field, Stephen Kenny will be very clear about the goalkeepers that will be called in ahead of the friendlies against Belgium and Lithuania on 26 and 29 March respectively.

Gavin Bazunu has established himself as the number one but Caoimhin Kelleher is a contender given his excellent cameos for Liverpool and Mark Travers has had a strong season for Bournemouth in the Championship. So that trio is set in stone.

But with no points on offer in these upcoming games, there is an opportunity for Kenny to experiment and share out game-time between the trio, although three does not go into two if he plans to give a full 90 minutes.

Speaking on this week's RTÉ Soccer Podcast, former Dundalk goalkeeper Gary Rogers shared his perspective on how the Boys In Green manager may handle that position for the two games in order for Kelleher and Travers to get a chance, while maintaining Bazunu's momentum.

Gary Rogers, Neal Horgan and David Snedy were on this week's podcast with Raf Diallo to discuss Ireland and react to two rounds of LOI action:

"It's probably a complex enough issue because you've got three keepers there and with goalkeepers 45 minutes are just not great. You need to play (a full 90)," he said.

"It is difficult. Caoimhin has been unfortunate in terms of he missed out due to injury at key times when he probably would have got into the side and Gavin has benefited from that hugely.

"But Gavin has taken it by the scruff of the neck and been absolutely sensational. And arguably Mark Travers has had the best season to date. He's playing at the highest standard regularly. I know Caoimhin is playing in the Premier League when he does play but Mark is a top keeper in the Championship right now with the most clean sheets,

"It's a hard one to decipher what Stephen will do. I think he'll give Caoimhin a game, whether he starts in the Belgium game or Lithuania game, I think he'll play him in one of them.

"What he does with Gavin and Mark, he knows what he's going to get from Gavin now but it's important to keep him playing because he is a young keeper as well.

"Whether he plays Mark or Gavin in the second game, I'm not 100% sure what way it will go but I do think Caoimhin will get one of the games."

Elsewhere in the squad, Ireland Under-21 call-ups for Derby County's Festy Ebosele and Brighton youngster Evan Ferguson later on Tuesday essentially rules them out of immediate senior involvement.

But Rogers believes St Mirren attacking midfielder Connor Ronan, scorer of a superb goal in the Scottish Cup at the weekend, could be rewarded for his recent good form.

"He's probably similar to Jamie McGrath in terms of what he did this time last year and Connor Ronan is doing a really good job with St Mirren and scored a great goal at the weekend," said Rogers.

"Stephen does know the nucleus of his squad from his tenure already. So he's experimented and he's got a good grasp of it and he'll probably use the two games to experiment a little bit more but have a bit of a core group there." 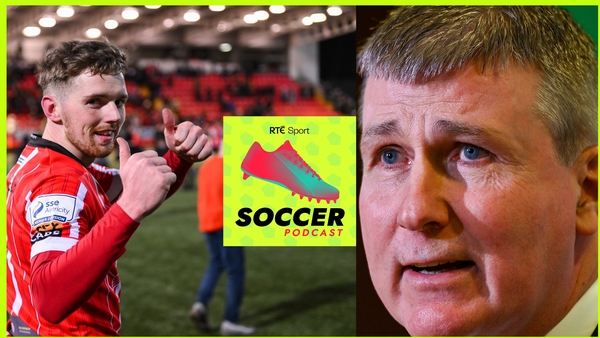