Shelbourne manager Damien Duff believes it is a sign of the ambition of his team that the players were left bitterly disappointed not to take all three points in last night's northside Dublin derby with Bohemians.

With a quarter of an hour to go in a feisty encounter, Sean Boyd’s second goal in as many games looked like sending the visitors to victory at Dalymount Park, with the subsequent dismissal of Rory Feeley compounding matters for Bohs.

Keith Long’s side however rescued a point with just three minutes remaining in the game when Grant Horton was the quickest to react in a goalmouth scramble to smash the ball home.

After a cagey start by his team, Duff said his players showed good composure and game plan execution and should have come away with the win.

"On reflection of the game, the lads are gutted they haven’t won the game, which I think speaks volumes about the squad," he told RTÉ Sport.

"A team coming up from the First Division playing one of the supposed big hitters and they are disappointed they didn’t win the game.

With just three minutes remaining in the game Bohs were level from the boot of centre half Grant Horton.

Our coaches adjusted the set-up and it caused, you'd have to say, absolute mayhem

With Jack Moylan absent through injury, Duff opted for a 5-3-2 formation, but as the stalemate progressed, the coaching team decided to introduce Boyd and alter things slightly. The replacement duly scored with his first touch.

"We want to build-up from the goalkeeper. We had one idea in our mind to go one way, but our coaches adjusted the set-up and it caused, you’d have to say, absolute mayhem. That’s down to Shane [Farrell] delivering on it, Boydy with the goal and the coaching staff coming up with ways to break down a team."

The Shels boss also singled out the goalscorer for special praise.

The 23-year-old Dubliner caught the eye with Finn Harps last season and has settled in well to his new surroundings according to Duff.

"He’s been amazing. He’s a great lad. I think he was the first signing in the building, he came in four weeks early. 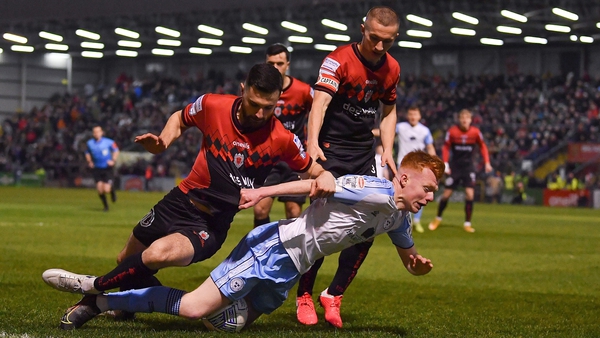