There’s nothing like a Dublin derby to whet the appetite on a Monday night. A northside Dublin derby, Bohs hosting Shelbourne, Keith Long v Damien Duff. In front of a sold out Dalymount Park, two proud sides looking for the early season bragging rights.

Despite the best efforts from both teams in midfield, the quality and end product was poor early on. Ali Coote and Dan Carr at opposite ends had chances from distance for their sides but nothing to trouble either goalkeeper.

As the first half progressed, the home side settled into the game and began to enjoy a lot more of the ball in the opposition half with the towering Promise Omochere asking plenty of questions of the Shelbourne defence on his return.

The best chance of the opening half fell to Jordan Flores from a set piece as the Gypsies slowly but surely began to stretch the Shelbourne rearguard. A floating corner from Ali Coote to the back of the box was met on the volley by Flores but he failed to get the power behind it that he would have liked.

Moments later and Aaron O’Driscoll showed his brilliant defensive capabilities with a fantastic last ditch sliding block across the box to deny the unmarked Dawson Devoy in front of goal.

Shelbourne had a strong claim for a penalty on the hour mark as Shane Farrell looked to have been fouled just inside the box by Rory Feely. Rob Harvey waved the claims away to the disgust of Damien Duff and his players on the sideline with Sean Boyd booked for encroaching onto the pitch. A let off for Keith Long’s side with the contact looking inside the box.

The deadlock was finally broken with fifteen minutes remaining courtesy of the recently introduced Boyd for the visitors.

With his first touch, Boyd got in between Horton and Kelly to poke the ball past Talbot.

A disastrous few minutes for the home side as in the immediate aftermath of the goal Rory Feely was sent off for his second yellow of the game for what seemed to have been one word of frustration too many in front of Harvey.

With just three minutes remaining in the game Bohs were level from the boot of centre half Grant Horton.

Neither side could find another with four additional minutes, both sides having to be content with a point apiece. 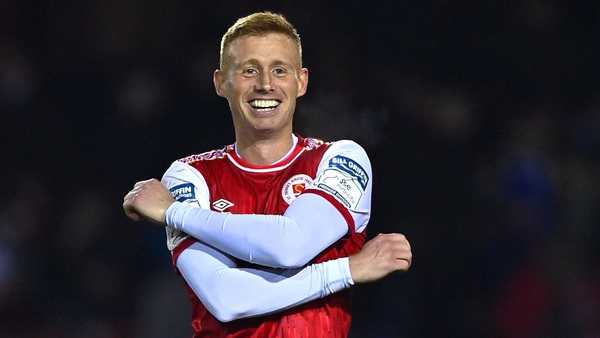