Harvey Barnes was once again the thorn in Leeds' side as they made a luckless start to life under new head coach Jesse Marsch with a defeat at Leicester.

Leeds had several opportunities to break the deadlock in their first game in the post-Marcelo Bielsa era but found Kasper Schmeichel in irresistible form before Barnes condemned the visitors to a fifth straight loss.

Making his 100th Premier League appearance, Barnes continued his record of scoring in every top-flight game he has played against Leeds with a composed 67th-minute finish and there was no way back for the West Yorkshire club.

Yet another setback leaves Leeds continuing to look over their shoulder, although there may be some solace in an improved display after conceding 10 times in their previous two games.

Marsch, the successor to the popular Bielsa whose name was persistently sung by a vocal travelling support, showed no lack of passion, regularly pacing and leaving his technical area, and gathered his team for a post-match huddle on the centre circle at full-time.

Leicester were far from their best but, in the absence of the injured James Maddison, did enough to claim a second win of the week, having earned their first league victory of 2022 on Tuesday at Burnley.

Much focus has been on Leeds' derisory defence recently, but they made an encouraging start under their new boss, who, in contrast to his predecessor's brooding presence on the touchline, cut an animated figure throughout.

Schmeichel got down to tip away after Dan James had got in behind Leicester's backline and drilled across goal, while the hosts' goalkeeper saved with his legs to deny Jack Harrison following another lightning Leeds break.

Harrison's teasing low ball along the six-yard line might have caused alarm but no one was able to meet it as Leeds continued to threaten, with Leicester largely innocuous at the other end against a team who leaked 20 goals in February.

While clear-cut chances were at a premium, there was a minor stir when Rodrigo got to the ball before being clipped by Caglar Soyuncu, but play resumed after a brief check, while the Turkish defender was thrust into action again with critical blocks to deny Junior Firpo and, from the resulting corner, Raphinha. 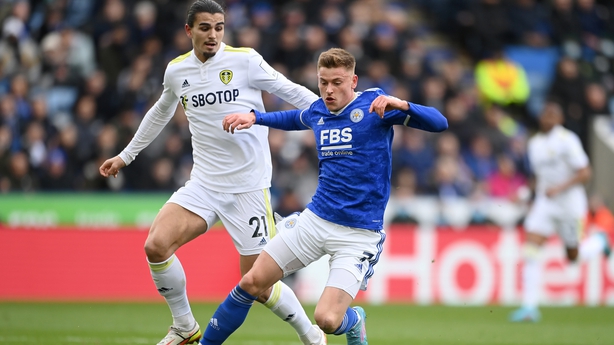 Leeds' shortcomings from set-pieces have been well-publicised and they were almost exposed from a corner, but an unchecked Wilfred Ndidi headed straight at Illan Meslier on the stroke of half-time.

Leicester, though, were slow out of the blocks upon the resumption and found themselves constantly pressed into defensive action, with a couple of important obstructions and the enduring class of Schmeichel keeping the score goalless against his former club.

Raphinha looked certain to break the deadlock - as he did when these sides drew 1-1 in November - as he got on the end of Firpo's low centre, only to be denied by Schmeichel's legs, moments after the Dane, watched on by father Peter in the crowd, reacted well to palm away Rodrigo's near-post header from a corner.

Brendan Rodgers recognised a change was needed and he hooked Jamie Vardy, who only briefly bristled on his first start of the year following his recovery from a hamstring injury, and Hamza Choudhury, repeatedly exposed down Leicester's right, in favour of Kelechi Iheanacho and Ademola Lookman just after the hour.

The changes paid almost instant dividends as Iheanacho teed up Barnes to give Leicester the lead against the run of play.

After a give-and-go with Iheanacho on the left, Barnes opened up his body and slotted across Meslier, whose fingertips were not enough to stop the ball sliding into the net.

It was Barnes' fourth Premier League goal in as many games against the Whites, who were unable to muster anything in the final quarter of the match.

Meslier denied Youri Tielemans late on to keep the deficit to just one goal, but it was Leicester's day.