Liverpool manager Jurgen Klopp has tried to dampen expectations on Luis Diaz after the £37.5million forward made an instant impact in his first two appearances.

Although the Reds boss described the January signing's Premier League debut in the 2-0 win over Leicester as "probably the best I saw as a new player", he knows there remains an adaptation period.

With Africa Cup of Nations winner Sadio Mane now back with the squad after returning from his success with Senegal, Diaz may find he has a reduced role in the coming weeks.

But that may actually benefit the 25-year-old as it will take the focus off him and reduce the hype which has greeted his first 121 minutes of football at Anfield.

"It was his first game and was probably one of the best I saw from a new player, that's true, because he looked completely natural," said Klopp.

"But it was only a first game and we have to see how he adapts to working with intensity and all these kind of things in the Premier League. There is no rush.

"Last night was a very good opportunity to start him because of Sadio not being here yet and Mo (Salah) coming back from an incredibly tense (AFCON) tournament. And yes, he showed up."

Mane is set to go straight into the squad for Sunday's trip to Burnley, having landed back in England on Wednesday night after extended celebrations in his homeland.

He will be joined by captain Jordan Henderson, who was rested against Leicester because of a minor back problem.

"Sadio will be available. He will come now this morning for training and will be in full training. We make a decision after that on how he feels," said Klopp.

"Emotionally he will still be high flying but physically we have to see how intense it was for him the last few days.

"Hendo will definitely be back. That was the plan before the (Leicester) game and is the plan now. If nothing happens he will play on Sunday."

For the first time since arriving at Anfield in 2016, Klopp has a fully-fit squad which has more quality than he has ever had at his disposal.

It meant the likes of centre-back Joe Gomez and striker Divock Origi did not even make the squad on Thursday.

The manager now has to make difficult decisions on who to leave out for each match day, but he accepts it is a good problem to have as they are still in contention for four trophies this season.

"It didn't happen a lot that we have this kind of quality players and they couldn't make the squad," Klopp said.

"Joe's situation was we had to make a decision whether we wanted a second centre-half on the bench or not, while Divock was not too long back in training after his injury so that was the decision there.

"It's good to have options with the quality they have. Taki (Takumi Minamino) is in a good moment, whenever Div trains it is like 'Why is he not playing?', Ox (Alex Oxlade-Chamberlain) played up front a really good part so now we have options - but that's what we need.

"We have a chat group where we share all information around the team and in this group the players who were not available or whatever always send a message saying 'Good luck boys' or whatever. And we had times when we had 13 or 14 players texting, which means they were not available for us.

"Now we have a different situation. But I've said it before, it's more important how we play than who is playing.

"The situation is not easy to be a star in the team but it is not allowed to cost you confidence, thinking 'I might play today but not tomorrow'.

"We have to make sure that as a group we use that situation in the best possible way." 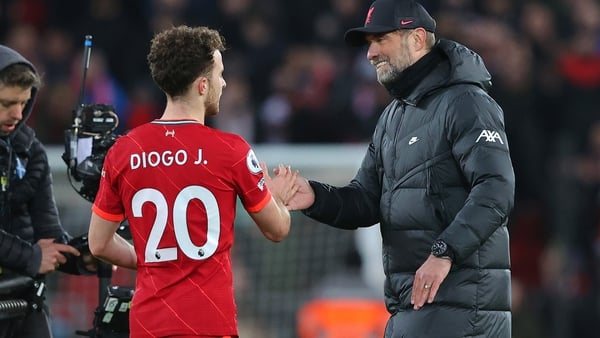 Jurgen Klopp: Manchester City are still too far ahead to feel under pressure