Liverpool manager Jurgen Klopp insists his side are not yet in a position to put pressure on Premier League leaders Manchester City.

A 2-0 victory over Leicester courtesy of a Diogo Jota double reduced the gap at the top to nine points, with a match in hand and a trip to the Etihad Stadium still to come in April.

And while Klopp does not feel that is close enough just yet he will ensure his side do their best to keep up the chase.

"I am not sure we are in a position to put them on our toes," he said.

"Even if we have no chance to catch them, we have to win our games. This football club is massive. It is always the same situation: there is a game we put on the shirts and we have to win it.

"But there is not only Man City to catch, there is a lot of teams behind us who want to catch us."

Jota opened the scoring in the 34th minute, his 100th club goal, and secured victory with a swivelled shot late on to take his Premier League tally to 12 this season – just four behind team-mate Mohamed Salah – and make it 30 in 60 games for the club.

"He is obviously in a goalscoring moment which makes it incredibly helpful and in the absence of Mo and Sadio it is extremely helpful," Klopp added.

"We knew he was good, but now we have no idea where his limit is or where he can go and I'm not sure he is already there."

Salah, making his comeback after African Cup of Nations final heartbreak, could have had a hat-trick within 20 minutes of coming off the bench just before the hour.

"What quality he has. I think the first situation was incredible. The first move was genius: the defender slipped and he walked away, unfortunately Kasper (Schmeichel) is not a bad goalie and he made an incredible save.

"That’s just Mo. He had had about 35 minutes, it was the ideal time to bring him on and we can use it.

"We played a lot of football in the first 55 minutes and that is tiring for the opponents.

"When Mo comes on he brings a different dimension and we used that." 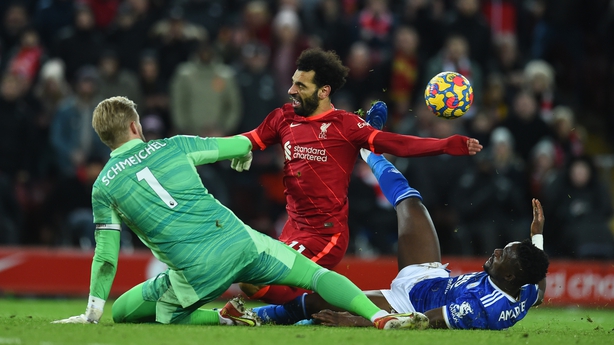 Leicester manager Brendan Rodgers dropped five players after their embarrassing FA Cup defeat to Nottingham Forest at the weekend and felt he got a response.

"The spirit was really good. Disappointed with the (first) goal, a set-piece has been an Achilles heel for us," he said.

On his public criticism of the players at the weekend Rodgers added: "Sometimes you have to be harsh to be clear and that was my thoughts at the weekend, it was nowhere near the level and especially in a derby game.

"It was a tough couple of days for us and coming here against a top opponent was going to be a stiff challenge." 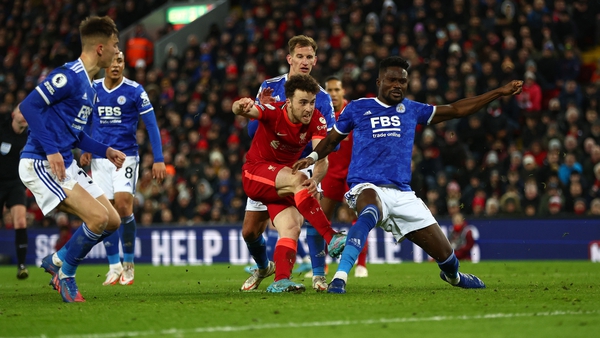 Jota on the double as Liverpool tame Foxes