Celtic survived a strong second-half fightback from Hearts to grind out a 2-1 victory in a pulsating Scottish Premiership encounter at Tynecastle.

Ange Postecoglou's side looked in full control at the break after goals from Reo Hatate and Georgios Giakoumakis.

The first goal came when a pass from Hearts substitute Nathaniel Atkinson into a crowded area was intercepted by Nir Bitton and Hatate surged forward on to the loose ball before firing a superb strike in from almost 30 yards.

Celtic doubled their lead in the 35th minute when Giakoumakis clipped home a cross from O'Riley at the near post, although replays suggested the Greek striker was marginally offside.

But Liam Boyce pulled one back after the break and the Northern Irish striker then missed a penalty as the hosts piled on the pressure in search of an equaliser.

The victory kept Celtic within four points of leaders Rangers ahead of next Wednesday's Old Firm derby.

Elsewhere, it was Scott Arfield's winner that maintained Rangers' four-point lead at the top.

The 33-year-old struck with 15 minutes left to beat Livingston 1-0 at Ibrox.

Borna Barisic swapped passes with Fashion Sakala to find Arfield for the former Burnley midfielder to win it.

They moved level on points with sixth-placed Aberdeen thanks to two goals in the last 16 minutes from Clark.
Regan Charles-Cook had given the visitors the lead but the hosts levelled when Declan Drysdale handled and Clark converted the penalty before his injury-time winner.

Fourth-placed Motherwell remain two points ahead of Hibernian after a 0-0 draw at Fir Park.

Liam Donnelly was sent off for two yellow cards for the hosts while boss Graham Alexander was also sent from the dugout. 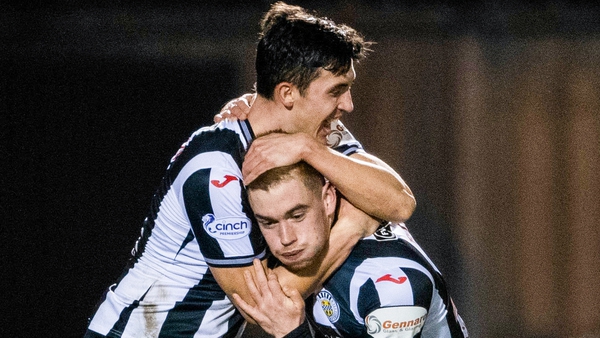