Ronan (23), who is on loan at the Paisley-based club from Premier League Wolves, curled home from 16 yards in the 61st minute to earn the Buddies a 1-0 victory and put the side within one win of the top six.

It was a third victory of 2022 for Waterford native Jim Goodwin's side but their first at home since Ronan scored a double against the Dons four months ago.

Ronan's goal - his fourth of the league campaign - was the bright spot of a game lacking in goalmouth action and Aberdeen never threatened an equaliser.

It was a night in which Ireland senior international Jamie McGrath was restored to St Mirren's starting line-up after missing two games because he had been affected by transfer speculation.

Speaking about the former Dundalk and St Patrick's Athletic midfielder on Monday, Goodwin had said, "All the noise about whether (McGrath) is or isn't moving was affecting him and we have had a chat and I have asked him to try to put all that to the back of his mind."

The hosts started well and Marcus Fraser and Greg Kiltie threatened but neither could hit the target.

Aberdeen improved in possession but could not make any inroads in the final third.

Lewis Ferguson did come close for the visitors from long range when space opened up for the midfielder to drive forward. He unleashed a left-footed strike from 25 yards which curled just away from the top corner.

The only time a goalkeeper was called into meaningful first-half action was when Calvin Ramsay's cross was too close to Jak Alnwick and the Saints number one palmed the ball behind.

The Dons fans were given some encouragement that the game might come alive just after the break.

Scott Brown swept a first-time shot just over from 18 yards before seeing an effort cleared off the line by Charles Dunne after Alnwick missed Campbell's deep cross.

The game came to life in St Mirren's first decent attack of the second half. Kiltie's square ball was behind Ronan but Ramsay was slow to close down the on-loan Wolves midfielder and he turned and curled the ball inside the far post for his fourth goal for St Mirren.

The Dons brought on Jay Emmanuel-Thomas, Connor McLennan and Matty Kennedy but they barely got in the St Mirren box in the final half hour and the visiting fans vented their frustration during and after the match. 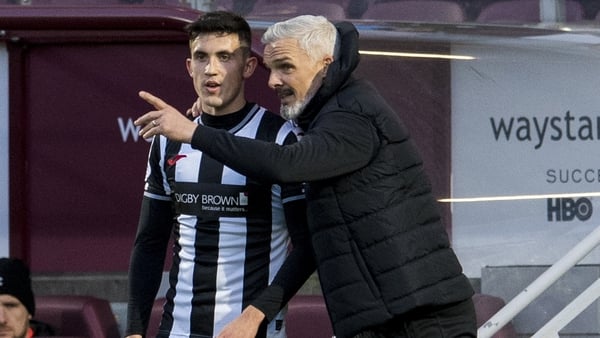