Live coverage on RTÉ2 and the RTÉ Player from 6.30pm.

Live commentary on an extended RTÉ 2fm Game On.

Live blog on RTÉ.ie and the RTÉ News Now app from 6.30pm.

Another decent crowd is expected after 5,154 braved the cold to get behind the side last Thursday. In the run-up to the Slovakia game, the FAI announced that over 6,000 tickets had been sold but, on the night, the turnout fell well short of that. The record of 5,238 that showed up for the Ukraine game back in October 2019 remains intact.

It'll be cloudy in Dublin, with persistent rain in the afternoon. Highest temperatures will be 9 to 11 degrees and it'll be breezy, with some fresh and gusty winds.

That was Vera Pauw's assessment in the wake of Last Thursday's 1-1 draw against Slovakia, a result that left the Republic of Ireland on four points after three World Cup qualification games.

There was a lot of frustration that night as the Girls in Green came up against a well organised, hungry and - yes - pretty cynical Slovakian team. They dug out a point thanks to Katie McCabe's well-taken leveller but it was a disappointing performance from the hosts.

Slovakia are a capable outfit. They ran both Sweden and Finland very close before taking a point from Dublin and they deserve credit for how well they set themselves up against the Irish. They'll probably feel they should have gone home with the win.

That being said, Pauw's charges were under par. They lacked conviction in their passing and played into Slovakia's hands in a pedestrian first half that was too slow and too predictable.

In the last campaign they paid a heavy price for dropping points against Greece and Ukraine so the big challenge now is to prove that last week was a blip that can be corrected.

The first step towards doing that comes against the group's lowest seeded team Georgia, who have lost all three of their games to date.

No Payne means someone else's gain

Heather Payne is unavailable for Ireland as the US-based player has college commitments.

It's a blow, but if Pauw was to choose one game to be without the tireless attacker, this would probably be it. It also opens the door for someone else to step in and stake a claim.

Amber Barrett has been on the fringes for a while, coming off the bench against Sweden but not featuring at all in the Finland or Slovakia clashes.

Rianna Jarrett came on in Helsinki and then, surprisingly, was omitted from the squad completely for Slovakia and Georgia. She's on standby and may be drafted in to replace Payne though she's clearly slipped down the pecking order.

Birmingham City's Emily Whelan is a livewire option, while Pauw turned to Kyra Carusa last week when Ireland were chasing a winner. Afterwards, the manager had words of praise of the American-born striker who made her presence felt in a short cameo. She looks most likely to get the nod.

Saoirse Noonan is another option. The Cork woman has enjoyed a good year with Shels and offers strength and versatility.

What to expect from the Georgians

Three games, no goals scored, nine conceded, zero points - it's been a difficult start for Georgia in Group A.

Their last win came back in June, a 3-2 a friendly victory over Azerbaijan in Tbilisi. Georgia will come and sit deep in Tallaght, hoping to frustrate their hosts for as long as possible. Their game plan will be similar to Slovakia's but without the same nuance or quality.

Ranked 123rd in the world, [Ireland are 33rd], if they can get anything out of this it will go down as a seismic result. It would also be an awful hammer blow to Ireland because the reality is, Sweden, Finland and Slovakia will not drop points against the weakest team in the group.

They were 2-0 down to Slovakia at half-time in their last game a month ago and dug their heels in on the turnaround to ensure they conceded no more goals, so they have resilience.

It's up to Ireland to shatter that resilience as early as possible.

View from the Irish camp

Vera Pauw: "We are clear about it, this is a must-win game for us if we are to qualify for the World Cup. We have prepared well and we are ready for this game, but we know that we must take the three points.

"As we expected when the draw for Group A was made, there are no easy games. In fact, we believe this to be the most difficult group of all with both Slovakia and Georgia being a lot stronger than they are given credit for. And, of course, we have the top two seeds in Sweden and Finland.

"It was fantastic to have over 5,000 fans for our game against Slovakia. The atmosphere that they create is just incredible and we hope that our fans will be there once again on Tuesday night cheering the team on."

Follow Republic of Ireland v Georgia on Tuesday evening via our liveblog on RTÉ.ie/sport and the RTÉ News app, watch live on RTÉ 2 and the RTÉ Player or listen to live commentary on RTÉ 2fm's Game One (6.30pm) 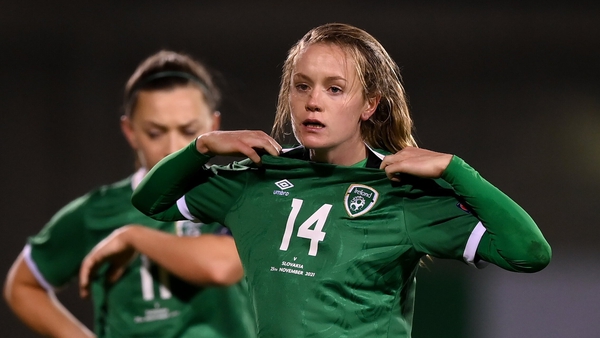 Heather Payne out of Georgia clash due to US college commitments