The Republic of Ireland will be without attacker Heather Payne for their World Cup qualifier against Georgia on Tuesday night as the US-based player has college commitments.

The Florida State Seminoles player is in the third year of a dietetics degree. She's working towards becoming a sports dietician and, though she's largely juggled her academic and football lives successfully, it will not be possible for her to feature in Ireland's fourth Group A game in five days' time.

"Unfortunately, being in college, I have college work that I can't get out of," she told RTÉ Sport.

"I've come back for every game as much as I could. I did what I could to get back for this game but we have a great squad. I think we'll be fine for Tuesday.

Payne will be a major loss to Ireland. She has developed into an incredibly hard working and dynamic forward who gives her team a constant out ball.

The Galway 21-year-old shone against for the Girls in Green during their 1-1 draw against Slovakia on Thursday, even when the team collectively were struggling to find their groove against dogged opponents.

"Of course we were looking for three points but we'll still take the point," Payne added.

"You could see our second-half performance, we created many chances, we were just unlucky. We'll take those positives into Tuesday. We're still very much in this competition.

"I tried to put in a shift in the second half. It was crucial that everyone dug in and it was great that Katie got that equaliser.

"You're going to be disappointed not getting three points here, but everyone needs to realise we still got a point out of a very scrappy game. Slovakia are a good team, they put up a fight against Sweden and Finland. We have to play all these teams again so you never know how the results are going to go." 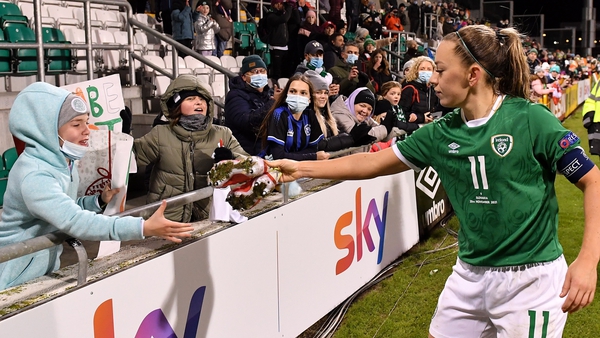 Katie McCabe: There's things we need to tidy up