Stephen O'Donnell had plenty of experience of Extra.ie FAI Cup finals as a player.

He was at Dundalk for four of their six-in-a-row of appearances in the showpiece fixture between 2015 and 2020. He started in two of those finals, coming on as a sub in 2015, while injury ruled him out of the 2018 decider.

In 2008 he was in the Bohemians team as they beat Derry City to complete the double.

This Sunday it's a slightly different role, following his retirement from playing almost three years ago, as he attempts to lead St Patrick's Athletic, as head coach, to a first cup victory in seven years.

"It's a lot different on the other side of the fence," he tells RTÉ Sport in the build up to the all-Dublin clash with Bohemians.

"As a player you just had to make sure that you appeared for training and the match. There's a good bit more planning when you're on the coaching staff.

"You're trying to get the balance of the preparation ready. It's something I've really enjoyed and we've enjoyed it as a group. We've earned that right with second in the table, a good spot, and then the biggest day in the domestic calendar.

"Pressure is when you're down the other side of it, when you're fighting for survival. This is an added bonus. Everyone wants to be involved in games at the Aviva, and we get that opportunity in the FAI Cup final.

"You have to savour it. We'll enjoy the build-up and the occasion."

One thing O'Donnell is hoping to make use of on Sunday is the depth in his squad.

Five of the last six FAI Cup finals have gone to extra-time, with two of them being decided on penalties. Indeed his victory as a player back in 2008 was also decided on spot kicks.

The clubs met four times this season in the league, with Pat's winning the first two meetings. But Bohs have come back to win and draw the two clashes since, including a 2-2 draw at Richmond Park earlier this month.

"What we do have is a very good squad, so any XI I do pick is going to be tough on certain individuals," O'Donnell says.

"That'll enable me to have a really strong bench. You've seen in previous cup finals that they go to extra time so midway through a second half the bench can have a massive impact.

"You see that more and more in football now, with players introduced having a huge impact on games. I'm sure Sunday will be no different.

"John (Mountney) is a long-term absentee, but other than that we'll have a very strong squad and plenty of options."

A crowd of around 30,000 is expected in Dublin 4 on Sunday afternoon, with Bohs having experienced three games at the national stadium during their Europa Conference League run during the summer.

One person they won't have on the sidelines is manager Keith Long, after he was suspended for being sent off against Shamrock Rovers in a tension filled league encounter two weeks ago.

O'Donnell says he's concentrating on his own players, and he is confident that they can get a result on Sunday evening.

"The Aviva, in its own right, is a brilliant arena and the surface is always very good," he adds.

"It's a great experience for our lads and something they've worked really hard for, so I'm going to make sure they enjoy it too.

"Just because it's a cup final doesn't mean our principles change. We never speak about the result. We speak about performance, workrate, our intensity, honesty towards the game - that's not going to change on Sunday.

"If they give me all that the result will look after itself. Sometimes in football you don't get what you deserve, it's fine margins. I'll live with that as long as we get all those attributes in the performance, which I'm sure we will."

Follow Bohemians v St Patrick's Athletic on Sunday via our liveblog on RTÉ.ie/sport and the RTÉ News app, or watch live on RTÉ 2 and the RTÉ Player (3.15pm) 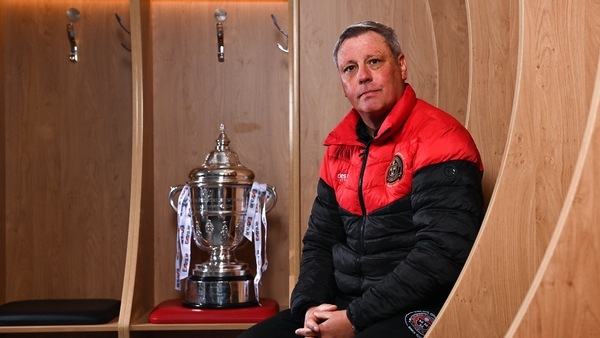 Long: No extra pressure on Bohs in FAI Cup final due to lack of European finish