Bohemians added the FAI Ford Cup to their Premier Division title after emerging victorious at the end of an thrilling contest with Derry City in difficult conditions at the RDS today.

Mindaugas Kalonas and goalkeeper Brian Murphy were the penalty heroes, the Lithuanian international scoring the winner, while Murphy saved brilliantly from Kevin Deery and Ruaidhri Higgins.

Derry's Sammy Morrow had broken the deadlock on the hour when he blasted home a right-footed free-kick from 20 yards high into the top left corner.

Glenn Crowe equalised in the 64th minute when he got on the end of a flick from substitute Kolonas to hammer home from close range.

Morrow became the villain when he was harshly adjudged to have handled inside the six yard box, and Byrne made no mistake with the penalty to give Bohs the lead for the first time on 70 minutes.

Morrow restored parity in the 76th minute when he volleyed home from close range after Man of the Match Niall McGinn crossed brilliantly from the left.

Derry boss Stephen Kenny bemoaned two penalty decisions that went against his men in the game, and the first of those arrived in the fourth minute when Morrow broke into the box and went to ground under pressure from Owen Heary but referee Anthony Buttimer waved play on.

However, television replays suggested that there was indeed a foul and Bohs were lucky to escape an early setback.

The lively McGinn and left-back Steven Gray combined well a minute later but the latter's cross for Gareth McGlynn on the opposite wing was well snuffed out by the alert Killian Brennan.

Derry were on top in the early stages and a seventh minute free from Deery was headed goalwards by Morrow but no-one was on hand to trouble Murphy.

McGlynn turned provider for McGinn in the 12th minute and his cross-come-shot was deflected over, only for Buttimer to controversially rule for a goal-kick. Add that one to the list of strange decisions seen all over the country this season!

The November skies darkened around the 14th minute and as the rain began to fall Gray and McGinn got their wires crossed to let in Heary but Barry Molloy came across to mop up brilliantly.

In the 17th minute, the industrious McGlynn and McGinn combined well on the left but the latter's teasing cross was superbly dealt with by Murphy under pressure from Mark Farren.

The Gypsies had shown little in the final third until the 19th minute when a deft Stephen O'Donnell and Byrne one-two set up Crowe, but Clive Delaney read the situation perfectly to clear.

Three minutes later Bohs almost broke the deadlock against the run of play when Brennan hit the angle between post and crossbar with a typical left-footed free from the edge of the box after Heary had been hauled down en route to goal.

A period of decent possession around the 27th minute sparked the previously subdued Bohs fans into life, while a 29th-minute needless foul from Neale Fenn on Peter Hutton ensured he was the first player into Buttimer's book.

Just past the half hour McGlynn sent over another inviting cross and Farren's near-post header was brilliantly touched over by Murphy.

The large number of City fans in the Angelsea Road Stand brought a bit of humour to an increasingly wintry afternoon with chants of 'Are you Shelbourne in disguise?', and as the game approached half-time, both sides were guilty of conceding scrappy fouls, Derry especially.

Heary showed no sign of his advancing age with a great burst forward in the 40th minute which left both Farren and McGinn in his wake, and although his first cross was returned to him by Fenn, his second was cleared.

Two minutes later, Farren was ruled offside but Murphy produced a good save with his feet nonetheless.

Farren followed Fenn into the book following a reckless foul on Murphy out near the right touchline in first half injury-time and the sides went in scoreless at the break.

Calls for handball from a Bohs corner fell on deaf ears as the decibel levels in the stands rose at the start of the second half, while McGinn blazed wide and then fed a cross straight into the grateful arms of Murphy as City continued to press without showing much guile or precision with the crucial final ball.

A poor ball out of defence from Brennan almost let Derry in, but Eddie McCallion's ball into the front two was overhit and neither managed to control.

However, the breakthrough did come for the Candystripes on the hour after Gary Deegan fouled Farren on the edge of the box after a patient build up.

Morrow stood up to blast a right-footed high into Murphy's top left corner and send the thousands of colourful City fans delirious in the Ballsbridge venue.

Fenlon immediately introduced Kalonas and this immediately gave his side a lift when his probing won a corner from which Crowe restored parity in the 64th minute.

Kalonas flicked on from the corner to leave Bohs talisman with an easy finish from close range and ensure that City had only led for four minutes.

Morrow became the villain when he was harshly adjudged to have handled a corner from Byrne inside the six yard box, and the former Bray, Shels and Cardiff man made no mistake with the 70th-minute penalty to give Bohs the lead for the first time.

Crowe tested Doherty minutes later from outside the box, while Deery tried his luck on the half-volley at the other end but both 'keepers were equal to their efforts.

However, an end-to-end game saw Derry back on level terms on 76 minutes when Morrow volleyed home from close range following McGinn's pinpoint cross from the left after a sweeping ball from Delaney from the right initially opened things up.

Both sides pushed for a winner and McGinn broke clear down the left in the 81st minute, cut back inside and unleashed a stinging right-foot shot that narrowly missed the target.

Ken Oman went close with a header at the other end, while Deegan was booked for a poorly timed two-footed tackle.

Liam Burns and McGinn both tried their luck with ambitious efforts as the clock counted down, but neither side managed to find a breakthrough inside the 90 minutes.

And so on to extra-time and both sides, to their credit, produced some remarkable football in search of the winner that would have ensured their own unique double.

Brennan almost stole in from Crowe's right-wing cross at the start of extra-time but Doherty got down bravely to deny him, while within seconds, substitute Brendan McGill had the Derry netminder at full stretch to keep out his testing cross-come-shot from the right.

McGinn drilled narrowly wide at the other end after a rare slip by Mark Rossiter, while at the other end, Crowe saw a speculative shot from 25 yards come back off the bar but the linesman's flag had already been correctly raised.

Substitute Thomas Stewart played McGinn in with 100 minutes gone but the 21-year-old failed to find any real power in his shot and Murphy smothered easily.

Bohs were denied a third goal when only a wonder save from Doherty denied Kalonas a certain goal after he was astutely played in by O'Donnell after a patient build-up towards the end of the opening period of extra-time.

In the 114th minute, Crowe nodded down from a throw-in on the goal-line for Kolonas, but the usually calm striker blazed over from ten yards.

With time running out and the prospect of penalties looming, McGinn got in behind Brennan in the final minute but his low drilled shot was somehow kept out by Murphy at the expense of a corner.

That ensured penalties would decide an FAI Ford Cup final for the first time in the competition's 86-year history, and it was Bohs who kept their nerve, with Brennan, O'Donnell and substitute Glenn Cronin netting the opening three kicks for Bohs.

In between, Rossiter hit the bar for Bohs, but Kalonas stepped up to convert the crucial fifth penalty to ensure the black and red of Bohs would adorn the old trophy for a seventh time. 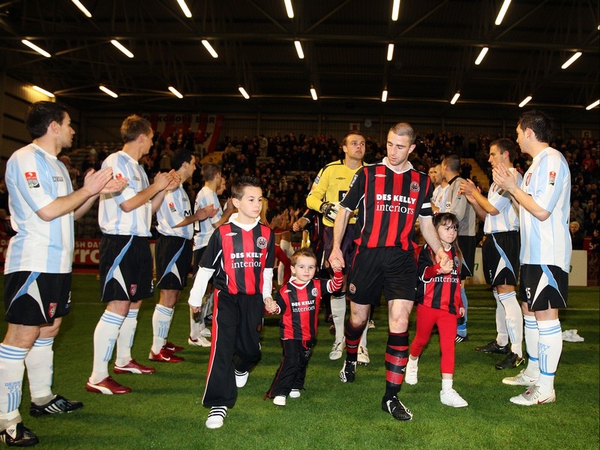