Kylie Murphy has won it all in the domestic game but Wexford Youths' inspirational veteran toasted another FAI Cup triumph with a simple refrain: "It gets better every time."

Murphy - transformed into a prolific forward this season to fill the void left by the departed Rianna Jarrett - volleyed home Youths' crucial second goal in a 3-1 defeat of league champions Shelbourne at Tallaght Stadium.

It's the fourth time in seven seasons Wexford have lifted the cup and Murphy has been at the heart of every one of those successes. She's the standard-bearer in a side full of experienced winners and though she lapped up the glory at the final whistle, the Carlow native pulled no punches when it came to assessing her team's first-half display.

"The first half was absolutely terrible," she said. "We didn't perform. It couldn't get much worse... we hadn't implemented our game, we hadn't done what we'd set out to do, we hadn't done anything only let Shelbourne play.

"We weren't at our very best in the second half but we were a lot closer to what this team is.

"It was frustrating. Look at the people who've come to support us; all the reporters, the TV, everything. You want to put on a show so for me, at half-time, it just wasn't good enough. I would have felt the very same if we went in 1-0 up.

"No matter what, performance is what matters. If you perform and you don't get over the line well at least you can look in the mirror and say, 'you know what, I done my best'. But that [first half], it wasn't good enough. We needed to change it."

Whatever was said in the Youths' dressing-room at the break worked because Stephen Quinn's charges emerged with much greater intent.

Murphy's strike put them ahead and Edel Kennedy sealed it with a superb effort 16 minutes from time.

"I just snapped at it," Murphy said of her goal. "I knew if I tried to put power on it it could have gone anywhere so I tried to get it on target. It kind of came behind me... honestly, my arse hit the floor and I thought, 'oh my God!'. I couldn't believe it went in."

Murphy reserved special praise for Orlaith Conlon who produced a terrific tackle on Sairse Noonan when the score was 2-1, adding: "Shels are a class team. They can turn a game in a matter of seconds. But my God what about our back line?

"That tackle from Orlaith Conlon... for me that was the winning of the game. That's the difference. That's why she's a Wexford Youths player. I thought we were done - she came out of nowhere."

Those moments ultimately swung it Youths' way and gave Murphy another medal for the mantelpiece. This was the second year the women's decider was played in Tallaght as a standalone fixture, as opposed to a curtain-raiser for the men's final in the Aviva Stadium.

Murphy has been open about her desire to see the game return to Lansdowne Road and though she relished the atmosphere created in the smaller ground on Sunday evening, her opinion has not changed.

"I have to say in the run-up if you had given me a choice it would always be the Aviva because it's our national stadium but you can't take way from the fact the atmosphere was unbelievable today. You could feel it.

"Having this as a standalone event is amazing as well... but if it was my choice I'd have it back in the Aviva. There's something breathtaking about it." 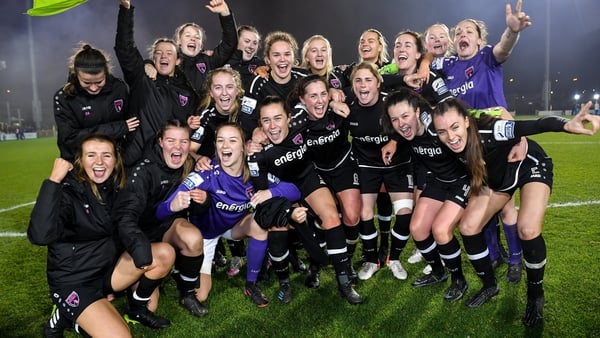