Wexford Youths turned on the style in the second half to lift the EVOKE.ie FAI Cup for the fourth time in seven seasons as Shelbourne's double dreams were shattered at Tallaght Stadium.

On the turnaround, Stephen Quinn's side – who had been cautious in that first period – took the shackles off.

Kyle Murphy volleyed them back in front in the 50th minute after sparkling play from player of the match Ellen Molloy, and with 16 minutes to go, Edel Kennedy put the cherry on top with a wonderful half-volley.

The margins were always going to be fine in a contest between two evenly matches sides but Youths’ experience – and huge hunger to end the campaign with some silverware – ultimately told as Shels ran out of gas and Youths, once again, took home the trophy.

Shels lined up with the same 11 that started last week’s league meeting, an enthralling encounter at Tolka Park that ended with the Reds winning 3-2 and snatching the title.

Wexford Youths had to start midfielder Kennedy in goal for that game due to injuries to regular keeper Ciamh Gray and back-up Maeve Williams, but Gray returned this evening, freeing up Kennedy to go back outfield. Defender Lauren Dwyer also came back in place of Lynn Craven after overcoming a hamstring problem.

A chilly and still evening made for ideal conditions in Tallaght with Shels settling better on a pristine surface.

Saoirse Noonan strayed just offside after a slick attack; then Youths defender Orlaith Conlon had to be quick on her heels to snuff out a dangerous run from Jessica Ziu.

No quarter was given in a cagey opening 15 minutes: the oohs from the crowd for a lovely Murphy flick were quickly drowned out by a throaty roar as Shelbourne captain Pearl Slattery won possession back with a clean, crunching tackle.

Inevitably, with the two teams so familiar with each other, the game slumped into a deadlock.

In the 24th minute Noonan fashioned a rare opportunity when she skipped away from a challenge on the right flank and fizzed in a good effort that Gray gathered. The Corkwoman was central to most attacks of note – she teed up Rachel Graham for a speculative 25-yarder – but the opener, when it arrived, came out of nowhere.

Ciara Rossiter’s deep free-kick in the 32nd minute was nodded back towards the edge of the box where Lynn Marie Grant was waiting to swing an instinctive - and hopeful - left foot at the dropping ball. Her half-volley looped high into the Dublin sky, over Shels stopper Amanda Budden and into the net.

Shels’ response was swift and impressive. The excellent Jess Ziu took the fight to Youths, embarking on some dangerous runs as the league champions raised the tempo.

Six minutes after falling behind, they levelled.

Ziu surged cut inside from the left and let fly with a well-struck effort that thudded off the post, before falling kindly to Grant who lofted home via the woodwork.

Youths started the second half with more intent. Quinn’s charges had been happy to cede possession and sit quite deep but they stepped higher up the pitch on the turnaround as they looked to disrupt Shels’ rhythm.

The 17-year-old Molloy - recalled to Vera Pauw’s senior Republic of Ireland squad this week - started to pull the strings. In the 50th minute, she orchestrated a superb Youths goal.

Having been at the heart of a lovely passage of play the teenager twirled back on to her left foot and bent in a lovely cross that Murphy volleyed beyond Budden.

Five minutes later Shels almost plundered another quick equaliser. Noonan poked a long pass forward away from her marker and sped through on goal, with a superb Conlon block denying the attacker just as she pulled the trigger. That brave piece of defending ended Conlon’s evening; she had to be replaced by Lynn Craven.

Shels kept probing but Youths, who had the best defensive record in the league this season, put the shutters up. Craven charged down another Noonan shot; then Noelle Murray tested Gray with an ambitious attempt. But as Shels threw more bodies forward they looked increasingly vulnerable to a sucker-punch. With 16 minutes to go, Youths landed it.

Kennedy put the seal on victory in style as she walloped home a fantastic effort from outside the area to spark wild celebrations.

She had the chance to get another two minutes later but she screwed her strike wide following a lovely one and two-ouch move. Just after that, Rossiter clipped a left-footer inches over as belief drained from Noel King’s Shels.

For Shelbourne, a fine season that yielded a memorable league title ended with the disappointment of a cup final defeat against a side who rarely fail to deliver on the big occasion.

Wexford Youths have their paws on the FAI Cup once again.

You don''t stop those.
Wexford take a 3-1 lead in Cup final thanks to a smashing half volley from Edel Kennedy#rtesoccer
📺https://t.co/2W5kFtUgZE
📱https://t.co/z1cRmc9Qmw pic.twitter.com/IWk7FT2kCL 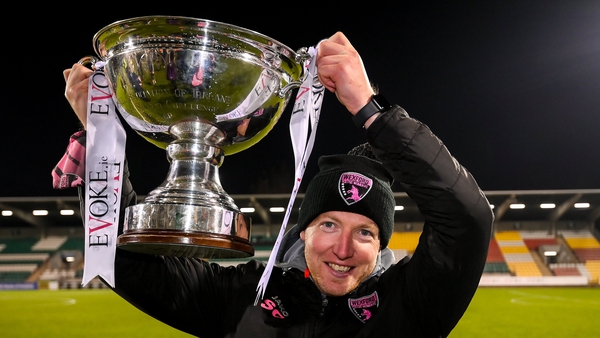