In the run-up to Ireland's 3-0 World Cup qualifier victory at the Stade de Luxembourg on Sunday, Kenny had been unhappy with Holtz’s description of his team’s style of play as "British" and the same as they had adopted for the "last 100 years".

And after goals from Shane Duffy, Chiedozie Ogbene and Callum Robinson secured his side victory, Kenny said: "We were disappointed he denigrated all the great players who played for Ireland.

"Denis Irwin was in with us a couple of weeks ago. Roy Keane, John Giles, Liam Brady, Mick McCarthy, Robbie Keane, Damien Duff.

"It is wrong to say they just fight for second balls and played caveman football for a hundred years. It’s wrong to suggest that. We thought he denigrated a lot of players and that was unacceptable.

"The players themselves know, they hear it themselves. We did speak about it. It is unnecessary, but it’s part of life. We have moved on already."

He added: "He is a good football coach, but psychology, he maybe needs to have a look at that side of things. His sports psychology wasn't of the highest order."

Home boss Holtz accused Kenny’s staff of unsporting behaviour after the final whistle, saying they had "played the big guys" in stark contrast to the aftermath of Luxembourg’s 1-0 win in Dublin in March.

He said: "I’m very disappointed about the behaviour of the staff of Ireland. This evening, they came and played the big guys because they won. In Ireland where we won, they immediately disappeared to the dressing rooms.

"We didn’t go to them and make them ridiculous, but they tried to do that this evening after the match. That’s not very fair play and very disappointing.

"We are not used to that from British (sic) teams."

The spat was the postscript to a pleasing evening for Ireland as they secured third place in Group A with a commanding second-half display.

After a first half of few chances, Luxembourg thought they had taken a 54th-minute lead through Danel Sinani only for Hungarian referee Tamas Bognar to rule it out for a foul on Duffy, and their evening got progressively worse.

Duffy headed the visitors in front after 68 minutes before Chiedozie Ogbene made it 2-0 with 15 minutes remaining and Callum Robinson completed the scoring in the 88th minute, with substitute Jason Knight having a hand in all three goals.

The result can only help Kenny’s cause, with his existing deal due to expire in July, but he insists he has always been looking to the future.

He said: "We certainly didn’t want to finish fourth. We’re not celebrating finishing third by any means, but I think people understand that there was a radical overhaul of the squad that was absolutely necessary.

"For us to go forward and be brilliant, we needed to make radical changes – we’ve capped 16, 18, so it’s been a radical change. But the spine of the team is still there because the experienced players have so much to give as well because they’re brilliant professionals.

"But we’re putting ourselves in place to have a strong Nations League campaign and leading on from that, a really strong campaign to qualify for the European Championship, so that’s the way I’ve always viewed it."

Holtz’s unhappiness was not confined to the Ireland camp as he also took aim at the referee.

He said: "I’m very angry about the referee, who decided the match this evening. He refused our goal, he didn’t give us a penalty when it was clear, a double hand in the box and with such a referee, it’s impossible to get a result." 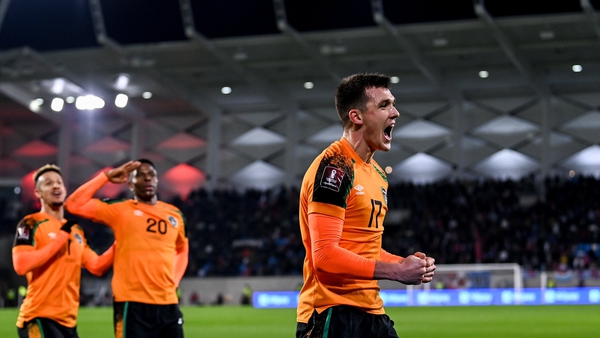