The Aviva Stadium will be a sell-out on Thursday evening when Portugal come to town.

We're a week shy of that night two years ago when the Dublin 4 venue last played host to as many souls for a football international. It was Denmark back then - familiar foes - a must-not-lose game for Mick McCarthy's side in the quest to make Euro 2020.

Matt Doherty's headed goal salvaged a deserved draw for the Irish. With so much at stake, the Boys in Green had to show an urgency that was absent from previous games in that campaign. A play-off for the pan-European footballing party was to follow, but then Covid intervened. McCarthy never got the opportunity to finish the job. His second coming as Irish boss was over. An uninspring tenure, despite a few respectable results.

He didn't get us to the Euros; the heartbreak of a penalty shootout loss in Slovakia saw to that. Since then, there's been much frustration for the Tallaght native in terms of getting positive results. The loss to Luxembourg last March a significant jolt so early on. An upturn, however, has come about in these autumn months, all started by the gutsy showing in that 2-1 loss away to Portugal.

🇵🇹 2-1 🇮🇪
Devastation for Ireland as Ronaldo heads home a Portugal winner 30 seconds after the five minutes injury time are up. From 1-0 up to a 2-1 defeat in six minutes.

A point, whether deserved or not against Serbia at home and then that all-important first win for Kenny against Azerbaijan, had us feeling a little better. There is a growing sense that the manager will get an extended contract, barring something catastrophic between now and Sunday next in Luxembourg.

And while we wait for Ronaldo and company to play their part on Thursday evening, we are reminded of what Denmark thought of us only a short few years ago. On the eve of the June 2019 Euro qualifier in Copenhagen, Danish midfielder Thomas Delaney labelled Ireland as the "most annoying" team in football. He continued: "We struggle with their tactics when they defend deeply and then one good cross against us could be all they need. When I saw that we got Ireland again, I said 'oh no, not them again'. They're the most annoying opponent."

"We don't like playing Ireland. They don't play flowing football but they're skilled at what they do."

Two years previously, the same player, when describing the task of trying to break down Martin O'Neill's Ireland, said: "It's like trying to open a can of beans using your hands".

Not very flattering, though hard to argue with when taking into account the turgid fare served up by previous Irish teams at home and abroad. A hard watch, no question! Add trying to drink soup with a fork to the frustration of opening a can of Bachelors with your bare hands.

Stephen Kenny clearly wants to mould a team that possess a bit more flair, that can get the ball down and pass. We've seen evidence of that so far, in the play-off loss to Slovakia, and the away qualifiers against Serbia, Portugal and Azerbaijan. Players like Andrew Omobamidele, Jamie McGrath and Josh Cullen who may not have featured in squads under previous managers, are now thriving.

In Callum Robinson, we might have somebody who can stick the ball in the net for us. Five goals in his last two games, albeit against poor opposition, is, nevertheless, noteworthy in that it's five goals from 20 international appearances for the West Brom player. The top scorer in the current Irish squad is James McClean, with 11 goals from his 86 caps.

The players, it appears, are buying into the 'Kenny Project'. Josh Cullen, speaking in advance of the Portugal game, said: "Working together has been really enjoyable, and I probably speak on behalf of all of the lads, that we're fully behind the manager and believe in what he’s trying to do.

"We’re enjoying the style of football we’re playing and we’re starting to see the rewards results-wise, from the performances we’ve been putting in.

"For me, it’s a pretty straightforward answer, yeah 100%, I want the manager to stay."

A final decision on Kenny's continued stewardship will be made at the end of the month.

And so to Portugal. Many observers are saying that it's a "free shot" for the hosts and that the more important game is three days hence in the Grand Duchy. True, with regard to exacting revenge for last March and possibly finishing third in the group, but a win over Fernando Santos' side would be a big feather in Kenny's cap. It would add more fuel to the feel-good factor that many, not all I grant you, are talking about. More fuel for now.

The manager, who must know that he will be in place, has spoken about his determination to do well in the upcoming Nations League. He wants to win it and get promotion. Bullish words, though not surprising sentiments when you consider Ireland's next game of real note after this weekend is not until March 2023 and those Euro qualifiers. Getting to the 24-team tournament in Germany and nurturing the talent at his disposal even more is what will ultimately define Stephen Kenny, the international manager.

Talking about nurturing also brings us back in time, to when Portugal were developing a side to be reckoned with after a period in the doldrums. Players like Figo, Rui Costa, João Pinto and Paulo Sousa were stars on the team that won the FIFA Youth Championships in 1989 and '91.

It took until Euro 96 before this 'golden generation' graced a major tournament. En route Portugal met the Republic of Ireland for the first time in a competitive match. At the old Lansdowne Road on a sunny April evening in 1995, a Vítor Baía own goal gave the home side victory. It was also the evening when one Eusebio was guest of honour, and after the match he requested the jersey of Paul McGrath.

The latter was still producing the goods for Ireland, but little did the crowd know that that win was to be the last high point of the Jack Charlton era. June '95 would see Ireland held by Liechtenstein and then beaten by Austria. The wheels were coming off. By the time the Irish headed to Lisbon in November, they were a jaded outfit and while they kept the Portuguese scoreless in the opening half, goals from Rui Costa, Helder and Jorge Cadete put the seal on an emphatic victory for the hosts in the pouring rain.

Portugal have qualified for every major tournament since, bar one (France '98). It would be expecting a lot in the current footballing environment for Ireland to produce something similar but a stirring show against Ronaldo and co at a heaving Aviva could yet be another springboard to more good days in the future.

A marked contrast then to how things unravelled after that first competitive date with the Portuguese. 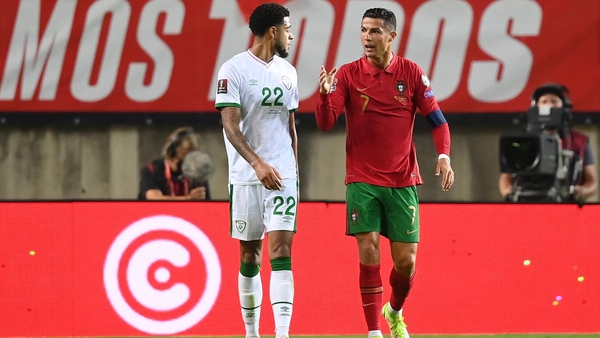 Intriguing Ireland and Ronaldo creating a perfect storm of interest