Liverpool booked their place in the knockout stage of the Champions League with two matches to spare after a comfortable win over ten-man Atletico Madrid.

This time there was no conceding of a two-goal lead as there had been in Madrid and at home to Brighton on Saturday after Diogo Jota and Sadio Mane's first-half goals set up a record-equalling victory.

A somewhat harsh red card for Atleti defender Felipe for a challenge on Mane, who was targeted for 45 minutes before being substituted at half-time for his own safety, aided the cause as Jurgen Klopp's side made it four successive group wins for the first time.

Victory secured a 25th match unbeaten, equalling the Reds’ record as a football league club set between March and September 1982 under Bob Paisley.

More importantly it gave Klopp some much-needed breathing room in Europe as, with a seven-point cushion in Group B, he can now afford to be more circumspect with his team selections.

That will come in handy as he lost Roberto Firmino to injury just 33 minutes after coming on as Mane’s half-time replacement.

In terms of midfielders it was two steps forward and one back as Fabinho took his place in the starting line-up and Thiago Alcantara on the bench – only for Curtis Jones to miss out after sustaining an eye injury in training.

Just like in the Wanda Metropolitano a fortnight ago Liverpool dominated early on and were rewarded with a 13th-minute goal.

Alexander-Arnold, for the first time in his career providing multiple assists in a single Champions League game, was also the creator of the second in the 22nd minute.

A move from left to right was started and finished by Mane, with the forward cleverly diverting home the full-back’s cross as he went past Michael Owen into third place on the club’s all-time European goalscorers list with 23.

Liverpool had found themselves in a similar position a fortnight ago only to squander a two-goal lead before snatching back victory, although the difference this time was Atleti were without their suspended two-goal hero from that night Antoine Griezmann.

Just like back in February 2020 in their meeting in Madrid, Mane was targeted by Atleti’s players and on that occasion Klopp substituted him for fear of the Senegal international getting sent off.

The boot was on the other foot this time, however, as when Felipe kicked across the back of the forward’s legs as he tried to launch a counter-attack referee Daniel Makkelie wasted no time in surprisingly issuing a red card.

Atleti’s protests were vociferous but not as loud as the chants of "adios, adios, adios" from the Kop as the centre-back departed.

Jota had a header saved by Jan Oblak before his inevitable replacement as Klopp again took no chances.

Unlike at the weekend against Brighton there was no sign of the chances drying up and Joel Matip’s brilliant through-ball deserved a goal but Jota’s cool finish in lots of space was ruled out for offside by VAR.

Mohamed Salah and Matip should have scored but both contrived to fail from close range.

However, if Liverpool needed a warning shot across their bows it was provided by former Reds striker Luis Suarez, whose chest control and half-volley which deflected past Alisson Becker off Matip was also ruled out for offside on review.

Atleti substitute Hector Herrera could have made for a nervy finish had he not scuffed wide from a three-on-two breakaway but the threat diminished after that, no doubt much to Klopp’s relief.

The positive of Thiago getting his first minutes since mid-September was tempered by the loss of Firmino, while Alex Oxlade-Chamberlain – who put in one of his better performances this season – also gave his manager cause for concern after going down injured and coming off soon after.

It appears Klopp is going to need the leeway in Europe this victory has given him if he is to manage his reducing resources successfully. 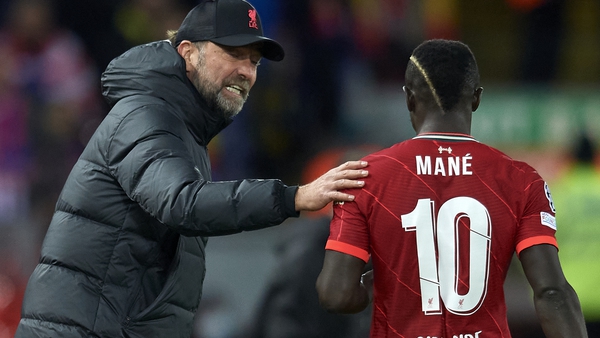 Jurgen Klopp: I hated having to substitute Sadio Mane during Liverpool's win over Atletico Madrid