Vera Pauw is aiming for the minimum target of a draw in Finland to put Republic of Ireland in the "driving seat" in the race for a World Cup qualification play-off place.

The Irish side will be aiming to bounce back from last Thursday's narrow home defeat to table toppers Sweden when they face Finland, their most direct rivals for second place in Group A, in Helsinki on Tuesday night.

The Finns are ranked eight places above Ireland in FIFA's rankings but Ireland manager Pauw believes there is little to choose between all the sides in the group, making the result in Helsinki all the more crucial for Irish hopes of reaching the 2023 World Cup.

"They were in the second pot, we were in the third pot but it's clear now what I said after the draw that this is a very interesting group. It's probably the most complex group that there is," she said, pointing to Sweden and Finland both only beating fourth seeds Slovakia narrowly by 1-0 and 2-1 margins respectively.

"Finland won 3-0 in Georgia which is also not massive. So if you compare that with other groups then in this group there is always the danger for us and the chance for us that Slovakia and Georgia are grabbing points somewhere. So therefore this game is crucial.

"At least we need a draw to be in the driving seat. So everything needs to fall into place now. This is 'the' game probably."

Pauw also feels Ireland's players will need to be prepared for a raucous home backing from the Finnish fans in the Olympic Stadium. 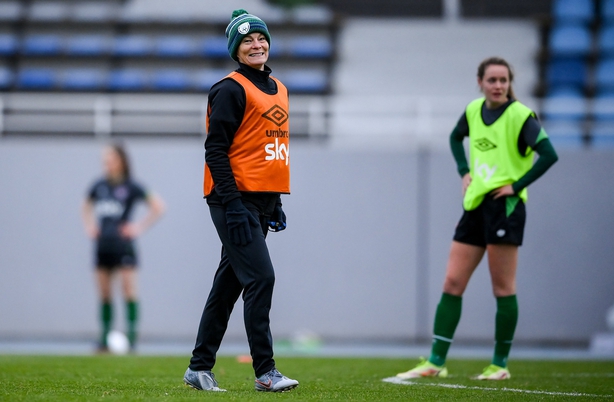 But she is confident that her side have "put the Sweden game aside" although she admitted that "it took so much out of us".

"It was disappointing of course that we couldn't steal a point in our first game against Sweden but this is a completely different game," she said of regrouping against Finland.

"They're very strong, they're very much a Scandinavian team so very fit players, very high players, high pace of play and very direct.

"So making the play, being the one more in possession is difficult, so it's a completely different game to organising yourself to stop an opponent."

Pauw added that the Sweden game had helped her side get used to playing under significant pressure from the opposition.

"But in possession you need to do more to win a game and I think against Finland there might be a chance that we can find opportunities to do more," she said.

Follow Finland v Republic of Ireland via our liveblog on RTÉ.ie/sport and the RTÉ News app and watch live on RTÉ2 and the RTÉ Player.