Watch live on RTÉ2 or RTÉ Player from 4pm.

It will be mainly cloudy and breezy in Helsinki for kick-off, with the possibility of light, scattered showers throughout the day. The temperature will hover around 10 degrees with gusts of wind getting up to 30km/h.

For all the positive words in the build-up to their group opener, the Irish camp knew anything other than defeat to Sweden was a long-shot.

The visitors arrived in Tallaght stacked full of quality and while the 1-0 scoreline suggests a close encounter, in truth, the result never seemed in doubt once the own goal was conceded. An indication of their dominance could be seen in Ireland shot-stopper claiming the player of the match award.

Vera Pauw's side were reduced to a couple of half chances and long range efforts against the favourites for the group. Matches against the number two side in the world are unlikely to determine Irish fate, but with a play-off spot up for grabs for the runners up, the games with Finland take on a huge importance.

A positive result in Helsinki and the 1-0 defeat to Sweden will be viewed as a confidence-building performance.

Speaking on RTÉ's Sunday Sport, Alan Cawley said he was disappointed by Ireland's primitive attacking gameplan as they chased an equaliser in Tallaght, the movement of centre-half Louise Quinn to the opposite end of the pitch resulting in a direct approach.

Against inferior opposition, do Ireland possess the guile to unlock defences?

Will Finland be accomodating hosts?

While it's a tad premature to call the game in the Finnish capital "must-win", if Ireland are to progress to a first-ever World Cup, then it surely falls into the "must not lose" category.

Sweden sit on nine points and could well maintain that 100% run to the end of the group stages. The real battle is for the runners-up spot.

Finland, as second seeds, would be favoured from the outset to achieve this and have two wins from two, the most recent a 3-0 win over Georgia. With a trip to Stockholm next up for them, another victory would stand them in good stead and keep Sweden on their toes.

Ranked 25th in the world, the hosts sit eight places ahead of the Girls in Green. An indication of the challenge facing Pauw and her team is the fact that Finland impressively sealed their place at next year's European Championships, finishing undefeated in a group that contained both Portugal and Scotland, two sides ahead of Ireland in the rankings.

The experienced Linda Sallstrom plundered 10 goals in that qualifying campaign and was on target in Friday's win over Georgia.

Midfielder Emmi Alanen will be a goal threat, both from set-pieces and as a provider for others.

Since the full-time whistle blew against Sweden, the manager and players have spoken almost in unison that the focus was always the second part of the double-header.

"The big one is Finland, it was never really about Sweden, we have to go to Finland and get a result there," Niamh Fahey said, while captain Katie McCabe has spoken along similar lines.

Follow Finland v Republic of Ireland via our liveblog on RTÉ.ie/sport and the RTÉ News app and watch live on RTÉ2 and the RTÉ Player 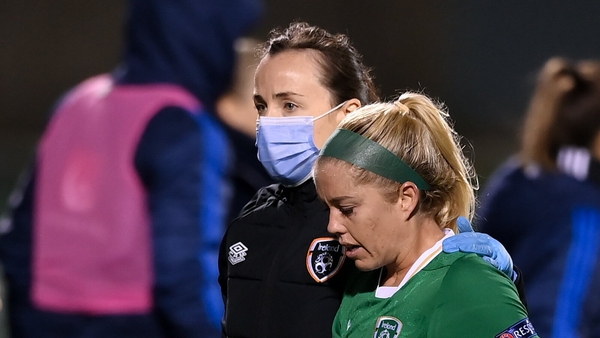