Denise O'Sullivan has been given the all-clear to play in the Republic of Ireland's crucial 2023 FIFA World Cup qualifier against Finland after an arm injury was found to be not as serious as first feared.

Although O'Sullivan stayed on the pitch until the full-time whistle despite the knock, she headed straight down the tunnel afterwards.

At full-time, Ireland manager Vera Pauw had outlined her concern over O'Sullivan's availability for the Finland, fixture which will take place in Helsinki on Tuesday. 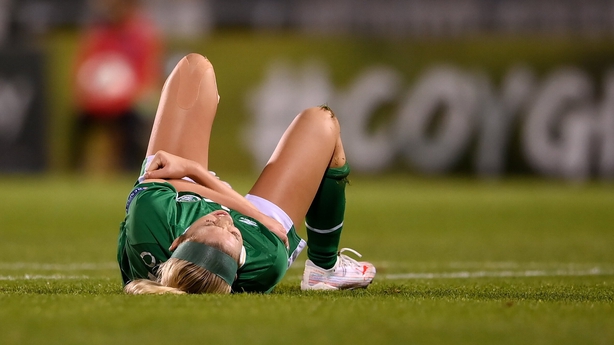 "It worries [me] really because it doesn't look good but we need to assess, so the doctor is now with her," Pauw said after the game.

But the Cork native has subsequently been given the green light to play after a scan and assessment by Ireland's medical staff on the suspected injury and will travel to Helsinki.

The FAI also confirmed that Amanda Budden, Éabha O'Mahony, Harriet Scott and Jessica Ziu will not be part of the panel that travels to Finland, with only the matchday 23 involved.

The Finnish team are second in the qualifying group behind Sweden, six points clear of Ireland, having played a game more. The group winners advance to the 2023 World Cup, while runners-up qualify for the play-offs.

Follow Finland v the Republic of Ireland via our liveblog on RTÉ.ie/sport and the RTÉ News app, watch live on RTÉ 2 and the RTÉ Player, or listen to live radio commentary on RTÉ 2fm's Game On.