Michael Obafemi was on the mark for Swansea but they fell to a 2-1 defeat away to Birmingham in the English Championship.

Riley McGree hit the winner eight minutes from time to see the hosts to a 2-1 win over the Welsh side after Troy Deeney's opener was cancelled out by the Irish striker.

It was also a disappointing day for Alan Browne who was sent off as Preston lost 2-0 in their derby game with Blackpool.

Goals from Keshi Anderson and Gary Madine gave Blackpool the victory with Browne picking up a yellow card at the end of each half.

Bournemouth extended their lead at the top of the table to six points with a 3-0 victory over Huddersfield.

Dominic Solanke opened the scoring from the penalty spot in the 10th minute after he himself had been brought down.

Solanke then doubled the advantage from close range after Philip Billing nodded the ball into his path, and captain Lloyd Kelly wrapped it up in the 64th minute.

Middlesbrough condemned Cardiff to an eighth successive Championship defeat with a 2-0 victory that saw the end of Mick McCarthy's reign at the Welsh club.

It was visiting boss Neil Warnock who was celebrating at the end on his return to the club he led to the Premier League in 2018.

Just over an hour later it was announced by Cardiff that McCarthy - who only joined the club in January - had left "by mutual agreement".

West Brom moved up to second with a comfortable 3-0 win over Bristol City, in a game delayed by medical emergencies affecting fans of both teams as well as a lengthy injury stoppage for City's Nathan Baker.

Jordan Hugill gave Albion a seventh-minute lead as he finished off a flowing team move and Kyle Bartley then nodded home a second from Darnell Furlong's long throw three minutes before the break.

Karlan Grant latched onto a poor backpass after 52 minutes to put the game beyond the Robins.

Coventry remained in fourth after a 1-1 draw with Derby. Matty Godden had put them ahead in the 20th minute from the penalty spot but Graeme Shinnie earned the Rams a point 12 minutes from the end.

Siriki Dembele hit a stoppage-time winner for Peterborough to complete a 2-1 comeback win over QPR after Harrison Burrows cancelled out Ilias Chair's opener.

Two goals in three minutes from Sam Gallagher and Tyrhys Dolan guided Blackburn to a 2-0 win over Reading. 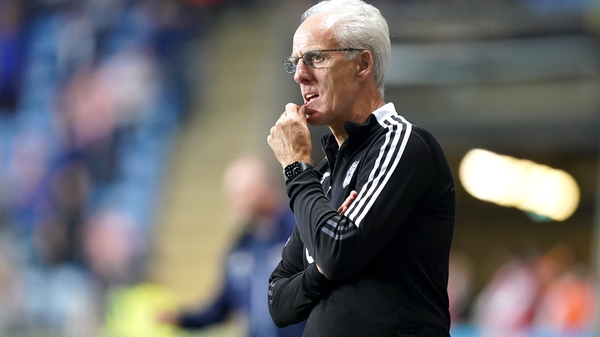