Chiedozie Ogbene has described his home debut as "incredible" as he offered a reminder of his belief that the Republic of Ireland's resurgence will take time to implement.

The former Cork City and Limerick winger scored his first Irish goal last Saturday in the win over Azerbaijan.

Last summer he became the first African-born player to wear the green of Ireland and revealed his belief in manager Stephen Kenny and the project the Ireland manager is undertaking.

Speaking to RTÉ Sport, he said: "My first camp in the summer, I did say the gaffer is trying to implement something special and I also said it would take time.

"What you're seeing now is all our sacrifices and dedication throughout. It didn't happen in this camp, good things come and when they do, they happen slowly. I'm happy for him and for the nation.

"It is paying off and we're playing with intensity, trying to raise the levels and press high with fast football. Tonight was a great demonstration of what we can do."

Ogbene admitted the early achievements in his international career are a great source of pride – and especially for his mother.

While all of his family could not be at the Aviva Stadium last night, he is hopeful of maintaining his club form to be in a position to play against Portugal in what is likely to be a sold out fixture.

"It was incredible to make my home debut in front of my fans and my family. It was a special moment for me. Unfortunately, my whole family couldn't come up because of work and stuff but I know they were supporting me in spirit.

"I know they're dying to call me now and I'm just hoping I can keep up this form and be back here next month. I'm sure they'll all be here."

So proud to make my home debut and to celebrate our Centenary game in front of you fans. So Proud of this team and our nation ???? #WeAreOne pic.twitter.com/kGpohLtIiQ

The winger came close to scoring with a first-half header as Ireland impressed in attack for successive games, something which has rarely happened for the Boys in Green.

A second goal in as many days did not arrive but the pace at which Ogbene can run at defenders is sure to be something Kenny will continue to utilise.

Reflecting on the moment he almost scored on his home debut, he added: "I think it hit my shoulder, it was just unfortunate.

"Those were the positions I was trying to take up high up the pitch and try to cause problems. It didn't come off with a goal but I'm happy to put myself in those positions.

"It's a God-given talent (pace) that I have and I'm trying to maximise it. I'm trying to improve other sides of my game. On matchdays you need to use your talent and gift and that is what I'm trying to do to help the team." 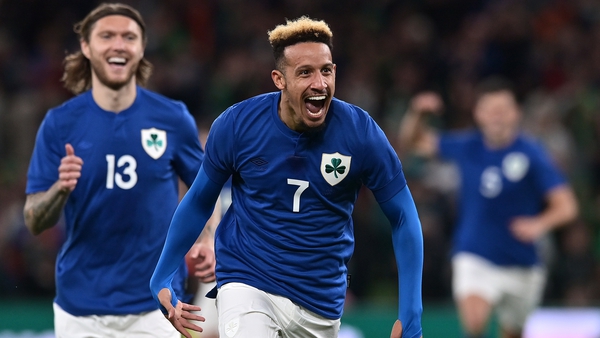