Republic of Ireland U21 manager Jim Crawford is expecting to face a Luxembourg side intent on reversing their away day blues when the sides meet in Tallaght tonight for their Group F European Championship qualifier.

Manuel Cardoni's team have performed admirably at home as they lost narrowly to Montenegro and held Ireland to a draw, but their results on the road have been a 6-0 defeat to Sweden and a 3-0 loss in Italy.

Crawford expects tonight’s opponents to try and come up with a solution to avoid another heavy away defeat – and he believes that solution will likely result in Luxembourg parking the bus.

"We went to their pitch, it was a narrow enough pitch, the surface wasn’t great but come here, that’s neither here nor there.

"I felt that if we had scored the penalty (missed by Tyreik Wright) early in the game it would have changed it, they would have come out and played higher up the pitch and there would have been more space available to our players to expose.

"Collie Whelan scored a magnificent goal and we just couldn’t hold out. We gave away a penalty towards the end of the game.

"It was disappointing after a fantastic start against a really difficult Bosnia side.

"I’m probably expecting more of the same in the game tomorrow, that they come and they’ll be patient. They’ll probably play in that low block as they did before and try to look to catch us on some sort of counter-attack.

"It’s going to be a tactical battle, we're all looking forward to it, the staff and players, particularly that it’s our first game in Tallaght.

"Hopefully there is a good buzz around the stadium and we won’t let anyone down in regards to creative football."

A hamstring injury is threatening Will Ferry’s involvement while Ollie O’Neill has also missed some sessions in the lead-up to the game through sickness.

"Because both haven't really trained during the week it will certainly impact the starting 11 for the game," Crawford said.

Meanwhile, the manager has hit back at suggestions from Galway United boss John Caulfield that some League of Ireland players have been treated like "guinea pigs" during this international U21 window.

The team travel to Montenegro on Tuesday, but with the country on the UK and German red list but not Ireland's, Crawford was forced to name an extended panel as Covid quarantine restrictions would leave him having to use just home-based players.

Caulfield felt that this was an unfair response, especially with 13 of those players not included in the squad for tonight’s Luxembourg game, and suggested that a forfeit may have been a better option, especially if the situation does not change between now and tomorrow’s departure date.

"We're doing our best to promote the league," Crawford responded.

"The initial squad had six or seven players from our league in the group, now all of a sudden we were told by UEFA that we have to play a home-based group and I’m bringing in home-based players that are playing in their first teams, that are quality players that have come and experienced playing with the U21s in a competitive campaign.

"It’s going to be an experience that they’ll never forget, and nobody can ever take it away from them.

"They’ll come here, they learn and they’ll enjoy it. Nobody will ever be able to take that away from them.

"I’ve had phone calls from first division managers and premier managers who supported the decision, and (said) it was refreshing.

"I do think we need to promote our league, we have penciled in a home-based game against an Irish amateur team early next year but this has come a hell of a lot quicker but it is what it is, we get on with it.

"The players are here in merit, they're playing in their first game, and I think comments like that, comparing them to guinea pigs, I just think was an unfair statement."

Follow Republic of Ireland U21s v Luxembourg U21s via our liveblog on RTÉ.ie/sport and the RTÉ News app, watch live on RTÉ2 and the RTÉ Player from 5pm. 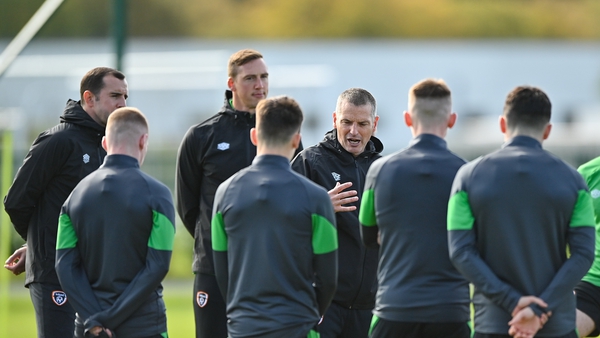 Irish U21 boss Jim Crawford not distracted by Montenegro uncertainty