This weekend could prove to be a decisive one when it comes to the destination of the Women's National League title.

With second-placed Shelbourne absent, reigning champions Peamount United could make the most of their game in hand to give themselves a more comfortable advantage at the summit with five further rounds of action remaining.

Peamount's trip to Bohemians is one of four fixtures on Saturday with third-placed Wexford Youths also hoping to keep their own title ambitions alive.

Two weeks ago, Peamount United struck a major blow in the title race when they thrashed rivals Shelbourne 5-0 to propel themselves to the top of the table with a game in hand.

Now, the reigning double winners have a chance to consolidate that narrow one-point lead further with Shels sitting this weekend out.

Beat sixth place Bohemians on Saturday and Peamount will move up to 50 points and more importantly will have placed a four-point cushion between themselves and the chasing pack - should Wexford win this weekend as well - with five rounds of action to go.

Bohs, who finished bottom in their WNL debut last season, have a chance to go fifth above Galway if results go their way this weekend. They are on a good run, having been unbeaten in their last four games, including three wins.

It's been a season to forget for Cork City with a 2-0 loss to Bohs two weeks ago their third defeat on the trot.

They sit second bottom on 10 points, just one above Treaty United and they face a tough challenge in trying to turn that form around against DLR Waves.

The visitors are riding high in fourth, well adrift of the top three but also 13 points clear of fifth place Galway - who they beat last time out - with two games in hand. 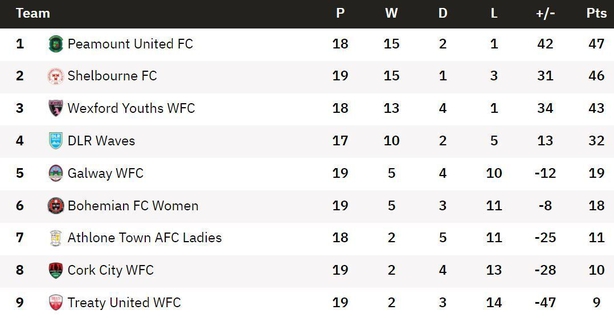 The last meeting between Cork and Waves ended in the latter's favour by a 1-0 margin on 10 July and since then the only sides to have beaten Graham Kelly's team are title chasers Peamount and Shelbourne, both by 2-1 margins.

Since Galway thrashed Cork City 6-1 on 21 August, they have yet to score in their two games since with a goalless draw against Bohemians and a loss at DLR Waves.

But a home fixture against the bottom side will be one where Galway will hope to right the ship as they look to hold onto fifth place.

Treaty United have been porous at the back with 30 goals conceded in their last seven games and no points earned since they drew 2-2 with none other than this weekend's opponents Galway on 11 July.

Wexford have kept themselves within touching distance of the leaders and will go second on goal difference above Shelbourne if they beat Athlone Town at home.

And in the event Peamount were to lose at Bohs, the south-east club would be within just one point of the summit.

Given that they finish their season with a trip to face Shels on the final day, making sure not to drop points in any other fixtures is paramount for Wexford.

Athlone, meanwhile, will be hoping to increase the gap between themselves and the bottom two with Cork City and Treaty United right in their slipstream should they falter.