There was late drama at the Aviva Stadium as Ireland battled back to earn a point in tonight's World Cup qualifier against Serbia.

Sergej Milinkovic-Savic handed the visitors a deserved lead in the 20th minute with an excellent near-post header.

And while Ireland rode their luck in the second half, relying on man of the match Gavin Bazunu to keep them in the game, they got their reward in the dying stages.

Four minutes remained as a scramble in the box led an uncharacteristic moment of panic in the Serbia defence and the ball ended up in the back of the net courtesy of defender Nikola Milenkovic who could not get out of the way of a clearance.

"In Kenny We Trust" read the banner from the old South Terrace as the singing section offered the manger their full support following a week in the spotlight.

Yet it was all Serbia for the opening five minutes, as the visitors played with real attacking intent, and then when Ireland tried to match their confidence, it almost back-fired spectacularly.

Playing out from the edge of their own box, Shane Duffy failed to control a pass from Andrew Omobamidele, allowing Dusan Vlahovic to pounce, however, Gavin Bazunu was quickly out to narrow the angle and made a vital save.

Ireland finally got going in the eighth minute as Jeff Hendrick was strong in possession, before linking up with Matt Doherty racing up the line.

Jamie McGrath and Adam Idah got involved, and while the ball could not be worked into the box, Idah did well to win a free - the set-piece was easily accounted for, however. 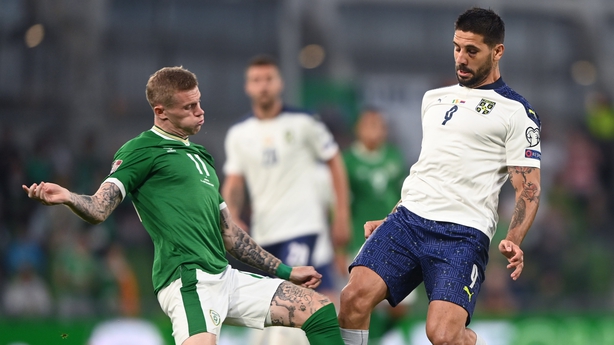 But it was encouraging, and two minutes later, Ireland were on the attack again, as Hendrick was finding real space in the middle of the park.

Alan Browne and Doherty then linked well to allow the latter to skip into the box, but just couldn't work the ball on target. Idah then glanced a header wide, but the striker had drifted offside.

Serbia were now restricted to shots from distance with Nemanja Gudelj twice trying his luck, and twice denied by Bazunu.

Hendrick then responded with a shot from distance of his own after a beautiful move from defence to attack with Josh Cullen and Omobamidele pushing the play forward.

A clever Browne turn created the space, and then when Hendrick got on a dropping ball, he opted for a quick pop at goal, but it flew just wide of the post.

Serbia finally got their passing game back in order in the 18th minute, and a great move into the box was well read by Omobamidele, preventing Aleksandar Mitrovic from getting in on goal.

The resulting corner, however, led to the opening goal of the game as Milinkovic-Savic brilliantly diverted a near-post header on goal.

Bazunu got a hand on the fast-moving ball, but could only help it into the roof of the net.

Ireland looked to respond and in the 25th minute, Jamie McGrath dispossessed Nikola Milenkovic and burst forward. His foot was clipped just as he was about to shoot and while a free was awarded, Hendrick’s effort was tame and straight at the keeper.

At times, you just had to sit back and admire the Serbian play, as all ten outfield players worked the ball around for fun inside the Ireland half.

And when the ultra-impressive Vlahovic cushioned the ball into the path of Mitrovic in the 39th minute, there was a sense of foreboding.

Bazunu was alert to the danger, however, and made a fine save to his right to thwart the attack.

Ireland were essentially attempting to hang on until half-time with just the minimum between the sides and managed to get to the whistle with the visitors leading 1-0 ahead of the second period.

A bright start to the second half for the home side, however there was no sign of this classy Serbia side sitting back as they were intent on getting that two-goal cushion

A half-chance presented itself for Browne, again attacking at the back post, as he got on the end of McClean's looping cross from the left.

The Preston man had space to take it down and work the keeper, however, the first touch was poor and Serbia cleared.

Right up the pitch, as it happens, and moments later, Bazunu was again keeping the team in the contest with a good save from Mitrovic’s close-range effort.

Mitrovic was again in on goal with 30 minutes remaining, as he beat John Egan to the early cross and poked an instinctive effort on goal. The save was reflexive and most effective as Bazunu shone once more.

Serbia were turning the screw, and while Callum Robinson, Jayson Mollumby, and Daryl Horgan had come on, Kenny’s side were yet to create a real goalscoring opportunity of note.

Into the last 20 and Serbia still pushed on as substitute Nemanja Radonjic raced forward and tested Bazunu once more – this time the keeper saving well at his left post.

Ireland started to commit numbers forward as they went in search of an equaliser, and naturally gaps were left at the back.

Radonjic raced clear once more and while Bazunu distracted him somewhat with a charge out of his box, it was McClean who read the danger and raced back to clear.

Kostic almost sealed it for Serbia with six minutes remaining but Bazunu proved the hero once again and buoyed his teammates for the final assault inside the last five minutes.

Sensing an unlikely victory, Ireland went on the attack and while Duffy headed over, the keeper had to make a fine save to prevent Omobamidele from grabbing a goal on his first competitive start.

It would have proved the perfect night for the Norwich teenager as he did not put a foot wrong all night, but in the end, it turned out to be a great night for an under-pressure manager who may now have gained the trust of more than just the Lansdowne Road singing section.