Stephen Kenny said that he is not in the habit of celebrating home draws, however, there was a sense that the Ireland manager was very happy with how things progressed at the Aviva Stadium against Serbia.

Ireland fell behind to a well-worked set-piece in the 20th minute as Sergej Milinkovic-Savic's near-post header gave the visitors a deserved lead in the Group A World Cup qualifying encounter.

A team packed with talent, Serbia came to Dublin with an attacking style and appeared intent on taking all three points as they look to secure the automatic place at the 2022 World Cup.

And Dragan Stojkovic’s side could have secured all three points such was their dominance at times and were denied on several occasions by man of the match goalkeeper Gavin Bazunu.

The former Shamrock Rovers stopper kept his side in the contest and the equalising goal would eventually arrive in the 86th minute of the game.

A comedy of errors as Milinkovic-Savic attempted to smash the ball clear from under his own crossbar but could only managed to hammer the ball off the back of Nikola Milenkovic and into the net.

Ireland could then have won it in the final stages only for a fine save by Predrag Rajkovic to deny Andrew Omobamidele a goal on his first start for his country.

The defender enjoyed a fine night in the heart of the Ireland back three, looking composed and controlled throughout, and then in the 90th minute unleashed a fine shot that looked destined for the top corner before the Serbian keeper made the vital save. 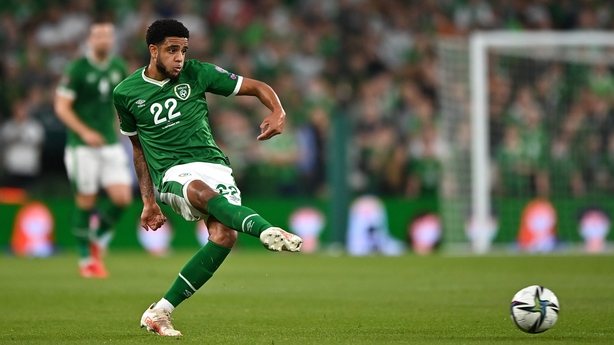 But it will certainly go down as a point gained for Ireland who are already looking towards the next major tournament, Euro 2024, as they are all-but eliminated from this World Cup campaign.

"I was very impressed with Serbia," said Kenny, speaking at the post-match press conference.

"I thought they were excellent on the night. They've improved since we played them last.

"We hung in there. It was our third game in six days - it was only their second, really - and it was a tough shift for the players.

"But they showed great spirit and they fed off the energy of the crowd - the crowd was amazing."

And while the manager admitted that it was a game that Serbia should have won, he was delighted with the performance put in by his jaded side who completed their third qualifier inside the last seven days.

"We're not in the business of celebrating a draw at home, but just in the context of the week, really, because I felt we deserved at least four points from the other two games, if not six, so to only have one coming into that game was a real kick in the teeth, and the players showed resilience.

"Gavin Bazunu kept us in it for periods because they had a lot of quality, Serbia. Gavin had a tremendous game and we got a break - and we haven't had too many of them, so we were delighted to get it.

"Matt Doherty, to be fair, it was his third game in six days and he's not been a regular in the Tottenham team, so he was absolutely exhausted, and he still pushed himself to the limits, got to the end-line to make that cross, so it's tremendous credit to him." 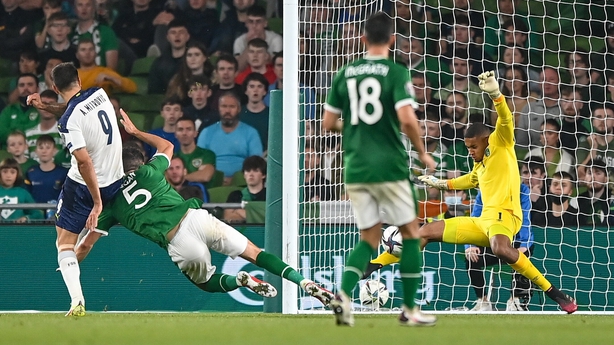 As mentioned, Bazunu was named man of the match, however, the accolade could easily have been shared with Omobamidele who put in a superb performance against a star Serbia attacking unit.

And the manager was full of praise for the two teenagers who only had seven caps between them ahead of the game.

"I couldn't have predicted that Andrew and Gavin played as well as they did," said Kenny.

"Andrew was against Mitrovic and Vlahovic there, really physically powerful guys, but he just has another gear.

"He's so quick and his composure – the two players, Andrew and Gavin, their composure is incredible.

"But it's early days for them. Andrew has only played seven league games for Norwich. He had a great pre-season, played every minute in pre-season, and I know how highly they regard him there.

"They really do regard him highly, and he showed why tonight."

Ireland will now go into the October games buoyed by the result and while the manager will continue planning for Euro 2024 for the remainder of the campaign, his contract is due to end in July 2022.

Kenny was asked if he would like his contract extended to allow him to plan properly for the following two years, however, he reiterated that he had enjoyed great support from the FAI.

"I have clear communication with a few people in the FA and they've been nothing but supportive," said Kenny.

"It's irrelevant if someone writes something on the back of a newspaper or whatever, I can't get sidelined by that.

"I need to remain focused on the job in hand because ultimately people over the last few windows have seen some really talented players coming through and the experienced players have shown brilliant attitude.

"But for a 97th-minute goal in Portugal, it could have been one of the great results. It's our only defeat in six matches, but we've been drawing too may. We need to start turning the draws into wins."