Stephen Kenny has been handed a boost ahead of the vital World Cup qualifier against Azerbaijan with the return of Callum Robinson and Alan Browne into the squad.

The two players have been key members of the squad since the former Dundalk manager took over as national team manager, and both missed the midweek trip to Portugal as a result of Covid.

Robinson contracted the coronavirus, while Browne was ruled out as he was deemed a close contact ahead of the trip to the Algarve, where Kenny side were beaten 2-1.

West Brom's Robinson will offer Kenny another attacking option in what is a must-win clash against Azerbaijan for Ireland to have any chance of finishing second in Group A to progress to the play-offs.

And while the manager did not confirm that the players would feature in Saturday’s game at the Aviva Stadium, he spoke highly of both and feels that they have started the season well at their respective clubs.

"Each situation is different; it is not a collective decision," said Kenny, speaking about the recent arrivals at the pre-match press conference.

"[Callum] is in contention. He has had a good pre-season. West Brom have started the season brilliantly. I’ve seen a few of his games live, he’s scored three goals and was unfortunate to be ill for ten days.

"But he trained yesterday in England, and he comes into the squad. We’ll see how he is in training."

The manager said that he will be keen to watch the duo in action at training on Friday before making a call on whether they will feature.

Like Robinson, Kenny has been impressed with the form of Browne, who has also been recovering from an injury while missed out as a result of being a close contact.

"Alan Browne has had an injury as well as being a close contact, and he has not played in a couple of weeks, but he has had a good start to the season. I saw him play for Preston and he started really well for Preston. So we’ll have to see how they train today and (inaudible – but something like "come to a conclusion based on that")

Former Shamrock Rovers defender, Liam Scales, has also been drafted into the squad as a result of both Dara O’Shea and Nathan Collins returning to their clubs.

And the manager said that he has watched the progress of Scales for a number of years, from his time at UCD, the Ireland Under-21s, on to Rovers and now having signed for Celtic.

Kenny believes that Scales has been steadily improving and gives him options as the 23-year-old can play in a number of positions.

"It's a terrific opportunity for Liam," said Kenny.

"Liam is a gradual improver, someone who played in the Under-21 team when he was still at UCD, he's gone on to Shamrock Rovers and had gradually improved and got better.

"He has a terrific attitude, he's a very good footballer and athletically he's improved.

"His adaptability to play in quite a number of positions; being left-footed, he's played left of a back three, played left-back, played as a wing-back, as he has for Shamrock Rovers this season.

"It's good to have that flexibility and he's earned his call-up."

The manager also gave an update on Shane Long, who missed out on the Portugal game after picking up Covid-19 ahead of kick-off in Faro.

"Shane was very unfortunate for that period. I honestly don't know how he managed to get Covid.

"He plays guitar in his room on his own a lot because of the Covid times. He brought his guitar with him and he plays away in is room and practises. He's a very careful person, always has the mask on, he's a family man.

"The virus doesn't discriminate – we've had a player who's got it over the last couple of weeks who actually was double-vaccinated, so sometimes it's hard to believe." 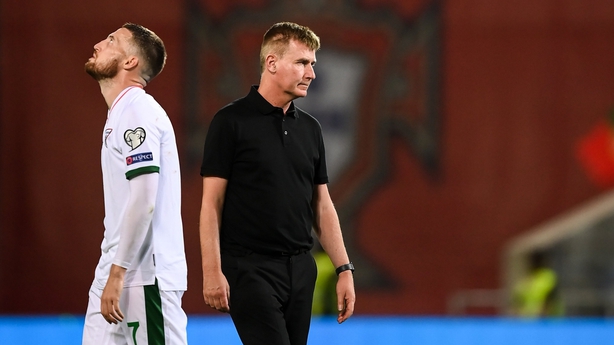 Matt Doherty, meanwhile, passed himself fit for the Azerbaijan encounter having struggled for periods of the second half in Portugal.

The Tottenham defender said that he felt his body shut down in parts during the game but battled through the pain to stay on the pitch.

"Second-half, I don't know what hit me. My body shut down and I had pains in my stomach, so I didn’t feel great," said Doherty.

"Every time I went down it wasn’t through injury, I was just really struggling. But I managed to crawl my way through the second-half and I feel a bit better now.

"It was extremely tough. There was a period in the second-half where I was really struggling but I just couldn’t bring myself to come off so I just decided to stay on.

"Whether that was for my own good or not I don’t know but I managed to get through it and see out the 90 minutes, but I feel better now."

Follow the Republic of Ireland v Azerbaijan via our live blog on RTÉ.ie/sport and the RTÉ News app, watch live on RTÉ2 and RTÉ Player, or listen to live commentary on RTÉ Radio 1's Saturday Sport.